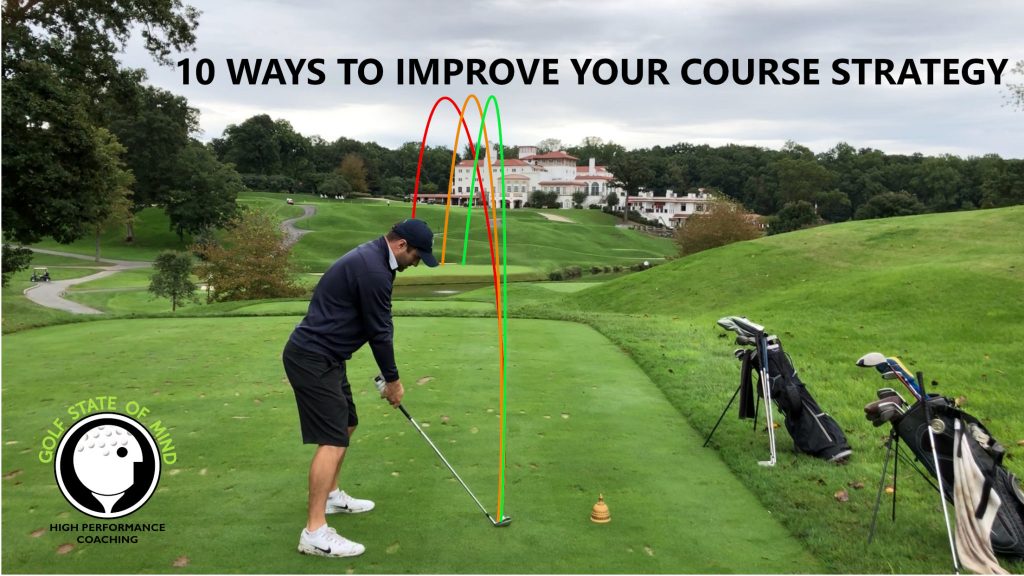 10 Ways To Improve Your Course Strategy and Lower Scores 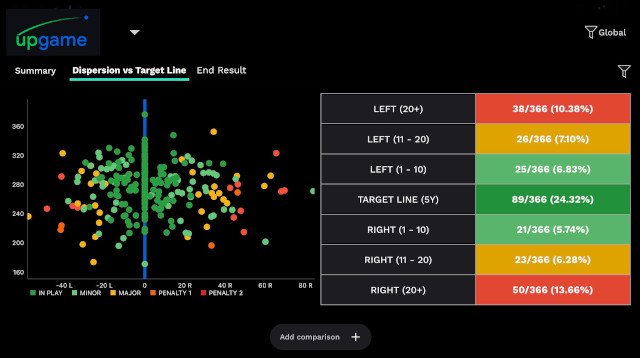 With this information, you can approach each shot with your dispersion in mind, instead of picking a target for the perfect shot (that you might pull off 1 in 20 times).

E.g. If you are faced with a shot from 190 yards with water to the right and the pin is on the right of the green (like in the photo above) and your shot dispersion (left to right) from that distance is 40 yards (20 yards left or right of the target), then clearly aiming at that pin is going to bring the water into play with at least 25% probability). However, if you were to aim 20 yards to the left of the pin, you can safely assume that you will not be in the water or short-sided right. You’ve immediately taken a step to eliminate a big number.

Tour players adopt a similar strategy. Despite what you might think from watching the TV coverage, they rarely aim at pins, especially if the pin is close to one side of the green. When you see those shots that land close to the pin, it’s usually because they’ve hit it to the very edge of their shot dispersion. Their actual target was probably the safe side of the green to avoid being short-sided or bringing a big number into play.

So how can you find out your short dispersion? I track my stats (and so do many of my of my students) with an app called Upgame, which is an incredibly easy way to upload stats and see your average proximity to your targets from different yardages and how far you hit each club. There’s a feature that will tell you your dispersion (in relation to a chosen target) with each club. If you’re in need of a better way to track stats and learn more about your game, check it out here and use the coupon code DAVID10 to get 10% off a package.

This one sounds obvious, but it’s surprising how few golfers (even single figure golfers and better) know how far on average they hit the ball. Here’s a typical conversation about course strategy between a coach and a student:

Coach: “Is that when it’s well-struck or on average?”

With launch monitors becoming more accessible and inexpensive, there’s no excuse for not knowing how far on average you hit each club. I’ve been using a mobile launch monitor (it actually turns your phone into a launch monitor) called Rapsodo MLM, which in my opinion is one of the better launch monitors for under $500.

It’s well worth the investment of time to hit at least 25 balls with each club and see what your average carry and roll is. Because the ball quality does affect the accuracy of the data you’ll get, I recommend hitting the same ball you would use on the course and hitting into a net.

3. Look at the Aerial Views

The players I work with make good use of yardage books and Google Earth imagery as part of their prep for a round. Good golf courses are designed to challenge you mentally as well as physically, and make you think there is less room than there actually is, or to lure you into taking on high risk shots. With the additional information of the aerial views, you can see the size of the area you actually have, not what the designer wants to trick you into seeing from where you are playing your shot.

4. Know The Good and Bad Miss

As part of your preparation for a round, you should know where you can safely miss and where missing the target will likely result in high numbers. Once you get your pin sheet, sit down and think about the good and bad miss for those pin locations and what’s around the green or in play off the tee. Put these notes in your yardage book to remind you when you’re on the course.

5. Assess How Much Risk You Can Take

On any given day, you don’t know what game you will have. On some days you will have your “A game”, where you are in control of your ball, but on others you might have your B, C or D game. Having a good course strategy can help you score well even when you don’t have your best stuff. Too many golfers I speak with try to force it and “play catch up” when they aren’t playing well and take on shots that are too risky with the game they have on that day. Part of a good course strategy is being able to assess your chances of pulling a shot off given how you are playing, and if needed, assume a wider dispersion and safer target. You don’t want to add pressure by trying to force yourself to play a game you don’t have that day – you’ll increase tension, frustration and make it worse. Some of the players I work with will assess a shot based on a “Green, Orange, Red” risk level, based on how they feel about a shot. If they are playing well and feel confident, they can take on more risk and it’s a green light, but if it’s a day where par is a good score, then it would be a red light and a safer target.

6. Get The Ball Into The “Scoring zone”

One strategy system that’s helped a number of my students is Will Robin’s “Scoring Method”. This system helps golfers better understand their game and formulate a strategy to limit mistakes and maximize scoring potential. Here’s a good video to explain it:

One of the key concepts is figuring out what shots you need to pick that guarantee that you can get into the “Scoring Zone” in regulation (the size of the scoring zone varies for different levels of player), so you minimize the big numbers. I.e. for a 9 handicap player the size of the scoring zone might be an area which extends the area of the green by 20 yards away from the trouble and making sure you get into that area in 2. This means that you don’t always take driver on every tee box, you take the club that you have a 80-90% chance of hitting the target and getting you into your scoring zone in 2 shots. You make the game a lot simpler. As you will also see in the video above, instead of seeing an approach shot as a yardage to the pin, you figure out the size of the area to aim into.

Are you aware of how different lies affect the carry of each club? It’s these details that the world’s best players are factoring into their decision making for every shot. From the fairway or tee box is where you’re going to get maximum compression of the ball with your irons (the ball gets squeezed between the club and the ground). From the sand or rough there is obviously less compression and therefore the ball is not going to travel as far.

Another mistake I see players make, especially on short par 4’s or when hitting approaches into par 5’s, is trying to hit the ball as far down the hole as possible. When I see a player reach for a 3 wood for an approach into a par 5 and I ask them what yardage they expect for their next shot, the response I often get is: “I’m just trying to get it as close to the green as possible”. But If you feel less comfortable hitting a shot from 50 yards, than you do 100 yards, then why would you want to have the shorter shot in? Not to mention, a 3 wood has a higher dispersion than say a 5-iron and you’re more likely to be out of position.

Work your way back from the green and think about how to get to your favorite yardage and what angle you’d like to play the next shot from.

9. Accept that on some holes a bogey is a good score

When you look at the scorecard before a round, take note of the lower stroke index holes. If you know that the average score on a particular hole is likely to be over par, then take a more conservative strategy on those holes. Lowering your expectations will take some pressure off you on those harder holes. You might be better off taking a shorter club off the tee to guarantee you keep the ball in play and in position and still give yourself a chance of making par (and bogey being your worst possible score), and at the same time, ruling out the big number.

One of the beauties of the game of golf is the fact that we never stop learning about it. Your Bryson DeChambeau’s and Phil Mickelson’s of the game know exactly how each degree of air temperature will affect the distance the ball will carry and roll. They also know exactly how much each mph of wind speed will affect the distance, and have a way to estimate it on each shot. Bryson Dechambeau was seen recently spraying his balls with water on the range to simulate dew and measuring how that affected the distance of his shots. During each round, improve your understanding how different conditions affect distance and carry.