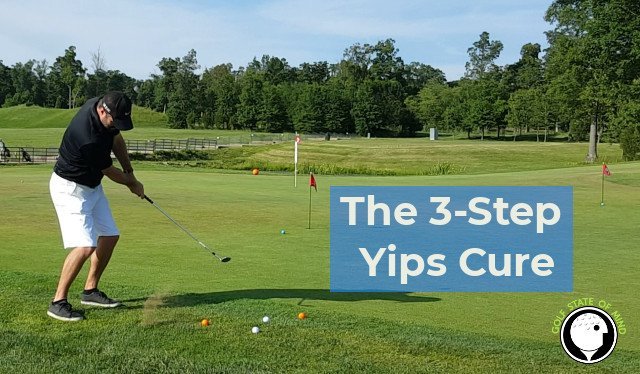 What causes “the yips”?

In 90% of cases, the yips is more mental than it is physical. Mostly occurring in the short game and putting, It’s caused by a mental interference between what you want to do (the shot) and the muscles required to do it. The effect of it can range from not being able to start the back-swing to a flinch causing thin and fat shots.

In practice, a player with the yips can often perform well, which makes it even more frustrating when that same game doesn’t appear on the course. During the comfort of the practice area, a quiet mind allows them full access to their skills. On the course, with the pressure higher, playing partners watching and their score at stake, their mind is agitated and the pathways which take the information about the shot to the muscles are blocked by fear and overthinking.

Instead of being athletic and letting their body react to the target, they become very internal. This is characterized by a long stare down at the ball, which disconnects them from their intention and the location of the target as each second passes. The brain no longer has the necessary input to tell the muscles what to do. During the swing or stroke, there is too much control (to prevent a yip), too much tension and an often variable tempo, which makes the movement very inconsistent.

Overtime, the player loses confidence in their ability to chip and putt. With more and more negative experiences, there is a highly negative association with those particular shots which becomes ingrained in the “belief system”. The fear of it happening again causes performance anxiety which further affects the player mentally, emotionally and physiologically. 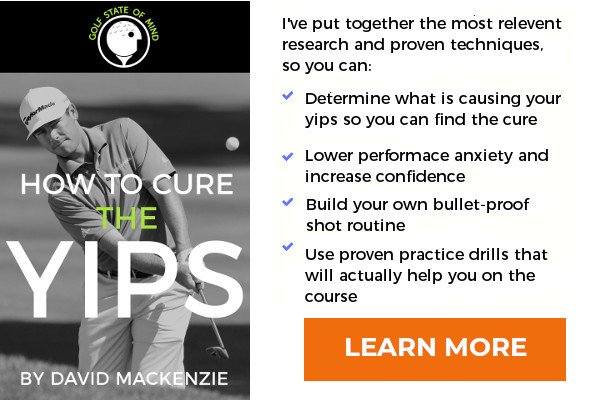 Cures for the yips

If you can implement this 3 step approach to curing the yips, you can see big improvement over a short period of time.

With all the players I work with (yips or not), we develop a “performance process”, which becomes the measure of success for their rounds. Players with the yips become very outcome oriented – if a yip happens it represents failure in itself and it quickly damages the players confidence, ego and scores. Whenever we measure success by the outcome, it puts a lot of pressure to achieve that outcome (in the case of the player with the yips, that outcome is not yipping). The outcome of any shot or round will always be uncertain and out of your control, however, “the process” is something that can be achieved with certainty and is 100% within your control. The brain doesn’t like uncertainty and triggers the stress response to try to keep you away from it. Focusing on certainty makes us feel safer and more comfortable. So what exactly do I mean by process? I mean simple actionable steps that you can do before, during and after each shot, which maximizes your chances of success. This can also include what that player does in between shots to manage their thoughts about the yips (self-talk, body language and being more present).

The subconscious mind is the store of all your memories and associations. If you have the chipping yips and you think of chipping, there will be an automatic response which will trigger those same feelings you get when a yip happens. To cure the yips, we need to “rewire” the brain to have a more positive relationship with that area of the game where it shows up.

This will take time but it will come down to repeating a positive story (instead of the one you might currently tell yourself), visualizations and using anchoring techniques which can then be used during your pre shot routine. After a while, you will begin to see yourself as someone who is proficient at the short game or putting and that there is opportunity there and not fear. Anchors and triggers.

Step 3: Practice in the right way

When I ask players with the yips how they practice, they invariably describe something very repetitive – hitting ball after ball, “trying to practice it away”. In practice this works great, as the process of hitting each ball is driven by the (subconscious) memory of the previous shot. On the golf course, you might hit a chip or putt every 10-20 minutes, not every 10-20 seconds.
A player with the short game yips came to see me this week. He had already completed an assessment, so I had an idea of what his issues were. After working on his process and what to focus on during this pre shot routine and during the swing, we moved on to hitting random shots. By changing the requirement of each shot, he increased his engagement with his intention (external focus), instead of being focused on what his body needs to do (internal focus). We also worked on being aware of tension in the hands and the importance of tempo. For the last 30 minutes of the session we did a performance practice drill which put him on the edge of his comfort zone – hitting a drive, then a short game shot (to within 10ft), then a 7 iron, then a another short game shot… we repeated this until he had hit 9 short game shots (in 30 mins), and he had to get 5 or more within 10 ft or face a consequence.

Practicing in this way trains the player in a way that will place more emphasis on the process than the result, help them manage their “performance state” and become better under the pressure of the golf course.

If you would like more information about my methods to cure the yips, please check out my “How To Cure The Yips” Program. 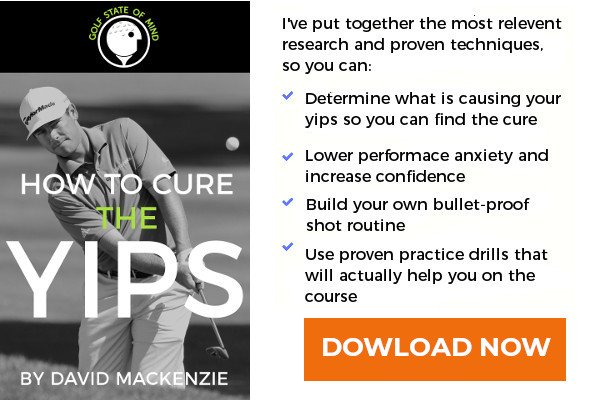 Please Share This
How To Cure The Yips Practice System