As a mental game coach, there’s one question that I get asked very often: “How do I cure the yips?”

But in order to find a cure for the yips, it’s important to first know exactly what it is and what causes it.

The golf yips come in all shapes and sizes – putting yips, chipping yips and even driving yips.

It can affect any player of any level, but surprisingly it affects more low handicappers than it does high. Even seasoned PGA Tour players, aren’t safe from it. The likes of Ben Hogan, Sam Snead, Johnny Miller, Bernhard Langer and Tom Watson have all suffered from what some golfers refer to as a “disease”.

I’ve worked with literally hundreds of players with the yips, many of whom are very good players close to quitting the game. From tee to green they can have a scratch game and then on and around the green they can look like a beginner.

But what exactly is “The Yips”?

This debate goes on (even among sports psychologists and sports scientsists), but from my experience, there are 2 types of Yips. There’s emotional Yips and physical Yips.

The Mayo Clinic defines “The Yips” as a “psycho-neuromuscular problem that often occurs in golf (especially during putting and chipping) when the golfer experiences freezing, jerking, or a tremor prior to initiating a putt or chip.” “Psycho-neuromuscular” simply means that the mind controls the muscles. It is not a disease at all but more likely a phobia that develops and then becomes a habitual state of mind.

In layman’s terms, (emotional) Yips is a manifestation of fear. Fear of hitting a bad shot, fear of embarrassment, fear of scoring a high number and fear of “yipping”. That fear is derived from the feelings associated with past experiences, which are stored in the subconscious mind (where your feelings are triggered). The severity of the yips depends on how deep-rooted in the subconscious that fear is i.e. how many times that feeling has been experienced in the past.

Your body’s natural defenses are designed to keep you away from the things you fear, via a mechanism called the “Fight or Flight Response”. On the golf course, you consciously want to hit the putt or chip shot, but the subconscious mind is telling you not to do it because it could result in that horrible feeling you’ve experienced in the past. There’s an internal fight between your conscious and subconscious mind.

Simply looking at the ball with a putter or wedge in your hand can start the yipping process. Your subconscious is saying “don’t even take the club back” (which is what some players can’t even do with a putter or wedge) and if you can manage to take the club back, your subconscious then says “don’t hit it”, which results in that jerky movement, scoop or leaving the putter face wide open.

Johnny Miller said: “When the putter went off like a firecracker in your hands and you knocked a 10 footer eight feet past the hole or left it four feet short … You lose all sense of how hard to hit the putt. Finally, the putter bolts away from the ball and then forward with an uncontrollable jerk. Your mind leaves your body, as though you’re in a movie watching somebody hold the putter for you.”

The fear of yipping causes a golfer to try and control the shot consciously instead of trusting their stroke. This means that a normally fluid stroke or swing (which is required for good golf) is broken down.

The second type of Yips (and these are certainly not mutually exclusive), is the physical Yips caused by a neurological disorder called Focal Dystonia. In this case, when fine motor movements are practiced over and over again a disorder can develop which causes the muscles to cramp at critical moments. Many musicians have been known to have this type of yips. It’s certainly possible that this form of yips can lead to the emotional type.

Cures for the yips

Golfers contact me very frequently regarding “a cure for the yips”. Understandably, they want it to go away as quickly as possible. But because the yips is more of an emotional issue, the total elimination of it is most successful through a series of one on one sessions, instead of quick tips. It’s also possible you could have focal dystonia which is causing the problem, so you’ll need to have an assessment (which I can provide). If you discover it is indeed an emotional issue, we’ll work on “re-programming” your subconscious mind so that you eventually erase past memory of yipping. If you would like more information or a free consultation, please contact me at david@golfstateofmind.com

Grip changes for the physical yips

In the cases of focal dystonia, changing grips has been known to protect against the yips. A few you can try are:

Yipping is exacerbated by thinking too much before a shot. I see a lot of players with the yips pause for a few seconds before taking the club back which really allows the fear to set in. A Tour player will have a really consistent routine that lasts the same number of seconds before each shot, so there’s no time for negative thoughts to creep in.

In much the same way (and whether you have the yips or not), you should always be looking at reacting to your target instead of thinking what your body needs to do to execute the shot. Have a very clear image of how the ball will get to its target and hopefully this will distract you from a yip. Visualization techniques for golf can help you with this.

Some players with the yips discover that one of their hands is more involved in producing a yip than the other. For this reason, one work around is to find out which hand it is and give it a very passive role in the shot. Literally just rest on the club during the shot and do all the work with the other. You might have heard of a European Tour player named Jason Palmer who now chips one handed after developing the chipping yips a few years ago.

Counting into the shot

One way to occupy your mind (and displace fear) is to start counting as you approach the ball. Don’t start your stroke on any specific number, just keep counting until the shot it over.

Another way to counter the over-active thinking is to say something during you stroke or swing. A couple of examples are “Back-hit” (Gallwey) and “Super-smooth” (Nillson and Marriot).

Putting while looking at the hole

Distract yourself from your mechanics by looking at the hole when you putt.

Stop talking about the yips!

A lot of the golfers I meet who struggle with the yips, seem to love talking about it. I suppose it comforts them to tell people about it so they have an excuse for not playing well. I often have to remind them that the more they talk about it the more it’s imprinted in their minds and the more it will happen.

I’d love to get your comments if you’ve had experience with the yips and hear about things you’ve tried.

The best way to fix it is with a one on one session via Skype, so I can start to remove that fear or find a work around for the physical yips. Please contact me on david@golfstateofmind.com if you would like to set up a free consultation. 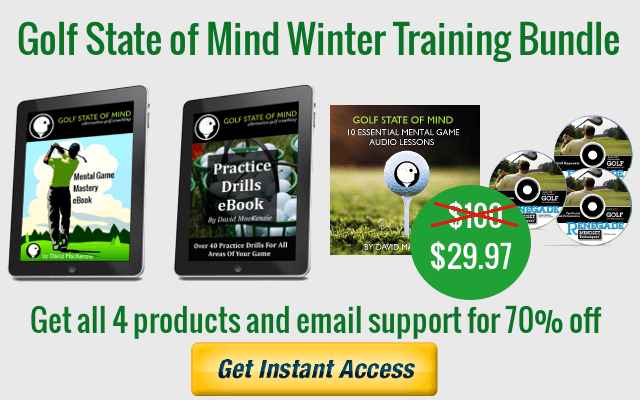