Golf Is A Game Of Misses

“On a good day—even your best—you’re going to miss some shots. The player who misses the fewest usually wins.” – Ben Hogan

I’ve intentionally used the work “misses” in this article instead of “mistakes”, but too many golfers get the two confused. Ben Hogan once said that he only hit 5-6 shots in a round that were exactly as he intended, the rest were good misses. Misses are an inevitable part of the game. Of course the aim is to limit them as much as possible, but it’s not so much about the misses themselves but how the player responds to them. Sure, we can learn from our misses and use them to improve in the long-run, but on the course this processing has to be done quickly.

On the PGA Tour, they have a stat called “Bounce back”, which in my option is a great statistic to look at to see how a player deals with the adversities and challenges of a round. It measures what the player does on the hole following a bogey or worse. As you can see, the leader in this statistic scores a par or better almost 40% of the time after making a bogey or worse, which is mighty impressive. So why are some players better at rolling with the punches of a round than others? It’s highly likely that they are using some of the following 10 mental game strategies to prepare for, and cope with, the ups and downs in a round of golf:

Strategy 1: Accepting That Golf Is NOT A Game Of Perfect

Golf is not a game of perfect. It’s a difficult game and you are always going to miss the target several times a round. It’s a an unpredictable game, and in fact, that’s one of the things that we love about it. Accepting that this is the case, and that you don’t have full control over the outcome, is an important step in mental coaching for golf. As I reminded my Tour player student, you’re never going to be immune to bogeys or worse and you’re likely to have them in any round, no matter how good you become. So accept that it will probably happen and it won’t be such a shock to the system when it does.

“I never learned anything from any game I won” – Bobby Jones

Failure and making mistakes are part of the journey to better, it’s how we learn and improve. I’d like you to work towards a “Growth mindset” which is more curious about what can be learned, as opposed to constantly judging your ability based on the outcome of each shot and the scores of your rounds. When we do this, and take a longer-term view of success, it makes it easier to deal with setbacks and challenges (as they are seen as being a constructive part of the improvement process).

Professor Carol Dweck of Stanford University coined the term “Growth Mindset”, with the opposite being a “Fixed Mindset” where people are limited by too much focus on results. Because people with a growth mindset know that mistakes are a part of the learning process, they are less afraid of them and it helps them play more freely. 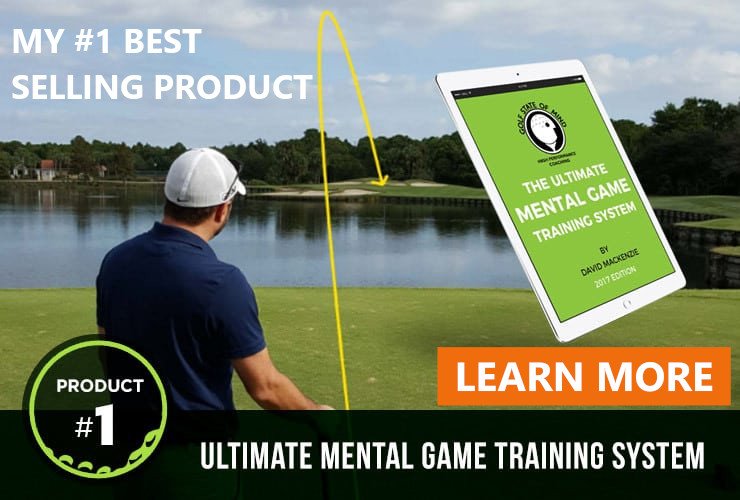 Misses are going to feel worse if you are also failing in outcome goals that you’ve set for a round. Avoid setting any goals for the outcome of your shots or your round. E.g. Avoiding 3 putts, hitting more than 10 fairways, breaking 80 etc. all add pressure and increase the frustration from misses. Instead, set goals that you have full control over.

Pay attention to how you are talking to yourself after misses. If you find yourself beating yourself up or being your worst critic, snap yourself out of it. It’s important that when you feel like you are losing yourself to a negative state of mind and bad mood, you change it by being your best “inner caddie” and having self-compassion. The best caddies on the PGA Tour are not just good at helping a player pick the best shot to hit, but they know what to say to help them during the tougher times of a round. You probably don’t have the luxury of a caddie, so you have to do this yourself using positive self talk.

Strategy 5: Separate You The Player From Your The Person

Your self-worth or ability level should not be linked to the score you just had on a hole or shot you just hit. To avoid playing “Ego Golf”, I suggest to my students that they “act as if” they are their favorite Tour player (with the characteristic and demeanor they aspire to have). This can help separate you as a player from you as a person. When the ego is too involved, it makes mistakes more difficult to deal with.

Strategy 6: Being More Self Aware

During your rounds, it’s important to be aware of what you are doing and thinking. Are your behaviors and thoughts helping or hurting your performance? Through the mental coaching process, we work to identify a player’s “Optimal Performance State”, so they are always taking action to move themselves towards it. When you have awareness of how you feel, what you are focusing on and what you are doing, you have more control.

To help you with greater self-awareness when you’re feeling the pressure on the course, it’s important to do some honest reflection after a round about how you dealt with the challenges. What might have caused your misses and how well did you respond? Create an action plan for limiting them and a better way to process them on the course. I always have my students grade how well they did with this as part of their post round review.

Strategy 8: Recall Your Past Successes

One way to not let misses compound and instead to bounce back, is to remind yourself of your past successes. Develop a personal highlight reel of the times you have felt most confident and successful on the course and got through them in between shots.

However you feel on the course, it’s ok to feel that way. This is essentially what mindfulness is about. If you feel disappointed, frustrated or angry, it’s important to accept that’s the way you feel (you are accepting what is true) and not to tell yourself it’s wrong to feel that way or to try and suppress it. When you go through this process of Acknowledgement and Acceptance, it’s much easier to move on and Refocus.

A good post shot routine keeps you more objective and less emotional. The trick is to reserve judgement and learn from the shot. Where was your focus before, during and after the shot? Did you focus on your process? Were you thinking about a negative outcome while you were over the ball? Were you 100% committed to the shot? Were you overly concerned about your swing mechanics? How was your tempo and was there any tension? End each shot with a post shot evaluation but avoid over-analysis. If you feel like it was something technical that caused the miss, play the shot again (without the ball) and feel the swing you want to make next time. Going back to Strategy #3, the journey to better is all about being curious, not judging the outcome of each shot. Instead, treat every shot as a learning opportunity for self-discovery.

Now that you’re equipped with plenty of mental game strategies for dealing with your misses, you’re expanding the number of tools you have in your mental game toolbox to help you deal with any challenge you are faced with on the course. By doing this, you’re becoming a more confident, mentally strong golfer with more success in your future.