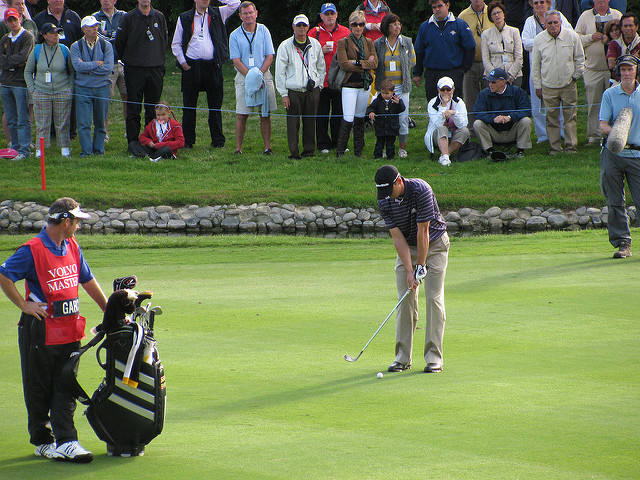 Sensory golf is about being in the present and connected to the sensation of golf shots – not the future consequence of it or the mechanics of the movement. This is a far more effective way to play than using technical swing thoughts or thinking about your score.

Many golfers I work with sometimes have the issue of “thinking too much” while over the ball. They’re focused on the consequence: “if I make this then…or don’t hit it there!” They can also be pre-occupied by what they think they should do in their swing. Sensory golf is a good solution to that problem.

Golf isn’t like a lot of other sports when the ball is moving and you don’t have time to think. In fact there’s plenty of time to think in golf. But thinking is not good for athletic movement. So what we focus on during the pre shot routine is a key part of accessing the best movement for the shot we want to play.

During the “engagement phase” of the pre shot routine the athletic mind needs to be switched on. The only “thinking” that needs to be done is getting set up properly. Most Tour players will make a final check that ball position and alignment look good and make sure it matches the shot that they’re about to play. After this, it’s all about connecting (engaging) with the sensation of the shot and focusing on that.

What are the possible sensations?

During the creative phase of the routine you will have mentally and physically rehearsed the shot.
Focusing on the sensation of feel involves imagining the feeling of the shot while over the ball.
Jordan Spieth and Jason Dufner, both say they feel the shot with their hands before they hit it. That waggle has a purpose which goes beyond keeping the hands loose. They’re feeling the ball flight while they’re doing it.

Seeing the shot as vividly as possible in your mind’s eye – the shape the trajectory, like a movie (outcome visualization). Seeing yourself hit the shot and what the action looks like (process visualization).

What will the shot you’re about to hit sound like? What sound will be made when the club hits the ball and grass? What is the rhythm and tempo of the shot?

Why does it work?

Firstly, when you are imagining a sensation, you’re keeping your mind free of any other possible distractions. You’re immersing yourself in the process and not thinking about the consequence. This is so important under pressure, when your mind can easily wander and create tension and doubt.

During the engagement phase, you’re giving the subconscious mind instructions (what it needs to reproduce during the desired swing). During a fluid swing, it’s your subconscious mind that’s the primary driver. You’re not thinking about how to move your body, it’s moving naturally. Swinging without thinking is always far better than giving yourself instruction during the swing.

Let’s look at a couple of examples:

For me personally, the “feeling” of short game shots and putts is very important.

As part of my pre-putt routine, after I’ve made a few rehearsal strokes to determine the line and pace of the putt, I “hold on” to that feeling and try to imagine it in my mind, right before I start my stroke. That’s when I know I’m ready to putt. When many golfers talk about the consistency of the pre shot routine, they are referring to the time it takes. For me, it’s about the consistency of the “engagement”.

For short game shots, it’s important for me to feel the club’s interaction with the ball and ground before I hit the shot, and really connect with that feeling in the few seconds before starting the swing.

Other players might prefer the visual or some combination of both.

During practice sessions work on developing your senses and finding out which gives you the best results. Make that engagement one of your “process goals” on your mental game scorecard.