In the “information age” that we currently live in, we’ve become accustomed to having a lot of things clamoring for our attention. We’re bombarded with news and updates everywhere we turn, and most of us now feel compelled to share our day-to-day experiences via social networks, meaning we’re permanently attached to our smart-phones. Our brains are being re-wired. We no longer have to remember things the way we once did, and we are continually multi-tasking which affects our ability to concentrate. We’re becoming less and less “in the present moment”, which increases stress and takes away from the quality of our lives.

A huge factor of success in golf is being able to quieten your mind and focus during the moments before and during a shot. If there’s too much thinking during this time, there’s doubt and tension which leads to impeded movement. The opposite is “the flow state” or “zone” where you’re free of doubt and negative thoughts, which allows your motion to be very fluid.

Accessing the Golf State of Mind

A lot of golfers seem to think playing golf in the zone is an elusive mental state which happens at random. In reality, the brain can be trained to get closer to the optimal state of mind needed to consistently access your very best skills on the golf course.

What is this mental state?

If you don’t already know, your brain has 2 hemispheres, left and right. The left side is responsible for logical and analytical thinking, whereas the right side is more holistic, visual and intuitive. Most people are left-brain dominant, according to neuroanatomist Dr. Jill Bolte Taylor of the Midwest Proton Radiotherapy Institute.

When you’re “in the zone”, you are what’s called “synchronized” – that is, there’s a balance and harmonization between your left and right-brain. Having selected the best shot using your left-brain, your cognitive thinking is turned off and replaced by relaxed-concentration. You’re totally aware, but non-judgmental of the things that are going on around you. It’s just you, and the target. This state of mind, could also be thought of as the #1 goal of the mental game of golf.

The opposite is when there is cognitive interference, or left-brain dominance as you are getting ready to hit. You might have picked a good target, but during the time from walking into the ball to hitting it, there’s “chatter” ranging from where not to hit it to giving yourself instruction on your swing. All this will break down the flow and decrease your chances of fluid motion and hitting a good shot.

Measuring the mental game of golf

Over the past few years, it’s become easier and easier to measure what’s going on inside your head, using devices (EEG) that can measure the frequency of our brain waves. Brain waves are the electrical impulses that move between synapses inside the brain. This bio-feedback can tell us a lot about our state of mind.

The normal day to day frequency of our brain waves are called “Beta” waves and they are associated mostly with left-brain activity – that is the logical, analytical and verbal side of the brain.

However, when elite golfers, or athletes in general, are in the peak performance state, there is a burst of lower frequency waves, called “Alpha” waves.

“When alpha oscillations are prominent, your sensory inputs tend to be minimized and your mind is generally clear of unwanted thoughts. When your brain shifts gears to focus on a specific thought—in either a positive or negative way—alpha oscillations tend to disappear and higher frequency oscillations begin running the show.” – Christopher Bergland, The Athlete’s Way

How to we train our brains to produce more alpha waves before a golf shot?

Over the past few years, I’ve been practicing meditation. Meditation has been used for thousands of years by Buddhist monks, but more and more people are taking it up each year as a way to reduce day to day stress and feel happier.

When you meditate, you produce more alpha waves. You improve your “power to ignore”, i.e. you can stay more present, without being distracted by those pesky negative thoughts that can interfere and affect your confidence at the crucial moments.

Essentially, meditation gives you more control over your mind, improving your ability to stay present and not judge yourself or what is in your environment. You won’t stop the negative thoughts, you just get better at ignoring them and staying present. As you practice meditation, you’ll also notice you have more time between, “action” and “response”, which means that you can choose better reactions to misses and not let it affect your mood ahead of the next shot.

Another important reason to meditate is that it’s been shown to lower activity in the amygdala, which is the part of the brain used for processing negative emotions. The amygdala uses cognitive information from the brain to determine the level of stress and danger in your environment. If it’s high enough it sends signals to the body to prepare for the “fight or flight” stress response, which if you’ve experienced choking, makes it becomes harder to think clearly and control your movement. Meditation is thought to shrink the amygdala and hence lower your stress response.

When you’re more present, the ego, which can be a big hindrance in golf, is dissolved. There’s no “good” or “bad” in the present moment, the mind just flows, non-judgmentally. Your mind becomes open to everything – it’s in a state called “the growth mindset” as opposed to a results-focused “fixed mindset”.

The Japanese have a word (mostly used in martial arts) called “Mushin”, which means:

“Mushin is achieved when a person’s mind is free from thoughts of anger, fear, or ego during combat or everyday life. There is an absence of discursive thought and judgment, so the person is totally free to act and react towards an opponent without hesitation and without disturbance from such thoughts. At this point, a person relies not on what they think should be the next move, but what is their trained natural reaction or what is felt intuitively. It is not a state of relaxed, near-sleepfulness, however. The mind could be said to be working at a very high speed, but with no intention, plan or direction.” – Wikipedia

Next time you’re on the course, I’d like you think about how you feel and what you are focusing on from the time you start walking into the ball until you hit it. Training yourself to get better at keeping the mind quiet will help you make a better swing. Meditation is one technique that will not only help with this, but it will improve your stress management and focus in general. You’ll be more in the moment, and happier for it.

P.S. Next time you play, turn your phone off and keep it that way for all 18 holes! Golf is your time to relax and enjoy everything the game provides us. 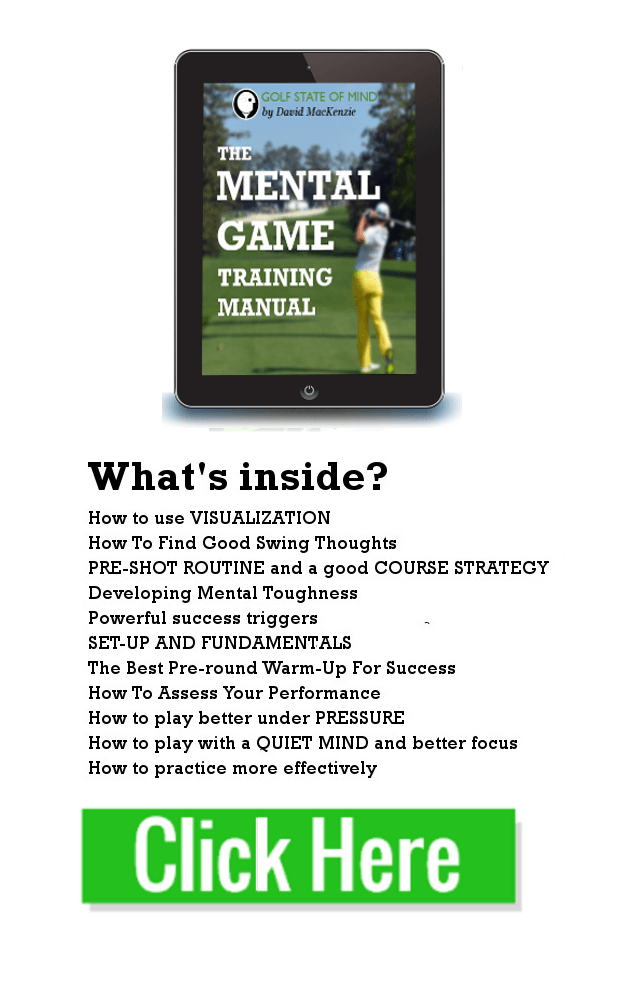