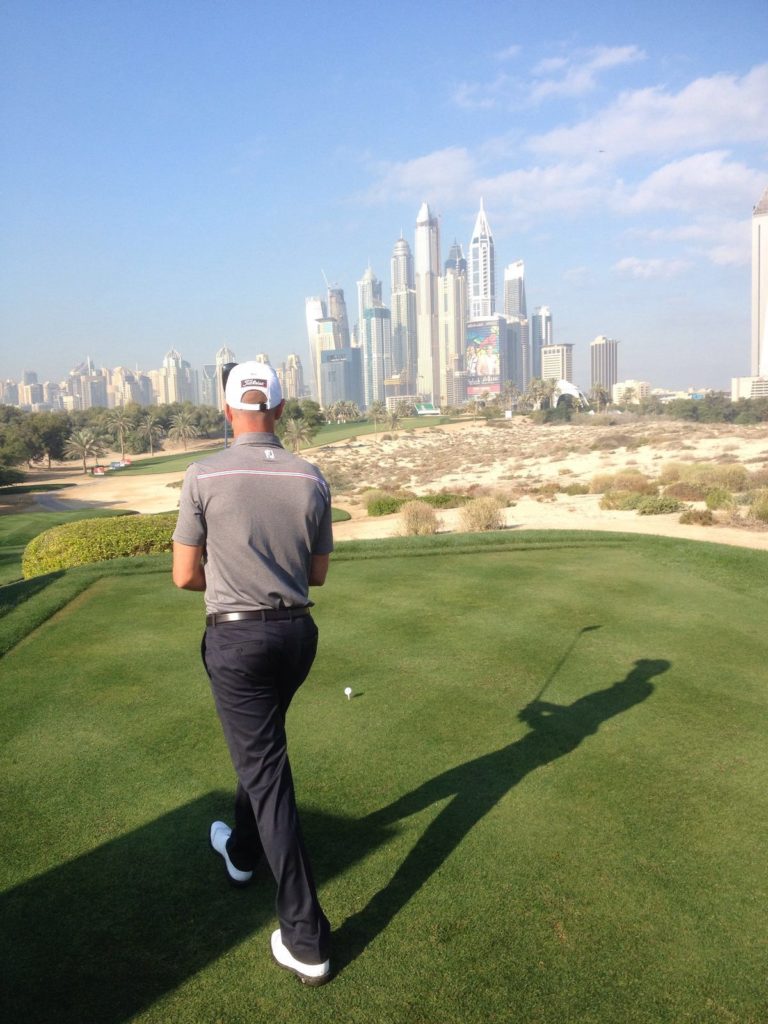 “Visualization is the most powerful thing we have.” – Nick Faldo

The Golf State of Mind coaching philosophy is about using everything you have to get the most out of every performance. Visualization is one of those things that doesn’t require any physical skill to learn, but as Nick Faldo says, it’s the most powerful thing you have.

The world’s best athletes use the practice of visualizing a great performance before the action for a very good reason – it works!

Visualization has been proven to:

The science of visualization for golf

Movement is initiated by the brain. When you want to perform a physical action, the best way to do it is to first feed the brain a picture of that action and the desired outcome of that action.

The brain doesn’t know the difference between a real and imagined action (the sensory input into the brain is the same). So, when you visualize a physical action, you’re actually stimulating the same muscles that you would use to perform the real action. Sports scientists call this “Functional Equivalence”.

A study was done by Sports psychologist, Richard Suinn, which involved skiers being monitored by an EMG machine (a machine that detects muscle activity) while imagining skiing down a slope. The results showed that even though the skiers weren’t moving, the exact same muscles they would have used during a downhill ski were activated.

So when you simply think about a physical action you are essentially, getting those muscles you need, ready for action.

In golf, if you don’t have a clear picture of the shot you’re about to hit, you’re quite simply wasting a valuable opportunity to prepare the brain to activate the exact muscles required to execute it. To access those muscles, the brains uses specific “neural” pathways to send impulses to those specific muscles. When you’re visualizing, you’re telling the brain which pathways it needs to use.

Visualization before a golf shot

I’m going to assume you have a good course strategy and you’ve picked the best target for your shot. But how will the ball get there? What does a good shot look like?

Here’s where your visualization comes in…

2 ways to visualize a golf shot

To visualize a shot, you need to get a clear picture of the path the ball will travel on to reach the target. Is it a fade or a draw? Low or high? How will it bounce when it lands? Make the picture as vivid as you can. If you’ve seen the Shot Tracker technology they use to show the shape of a shot on the PGA TOUR TV coverage, that’s what you’re looking for. This type of visualization is called “outcome visualization”.

The other way to visualize is to actually see yourself hitting the shot (with the flight of the ball too). This is the one I prefer as you actually get a look at the swing you need to make, which will help you repeat that movement. This type of visualization is called “Process Visualization”.

You might have heard Jack Nicklaus’ famous quote of imagining himself hitting the shot during his pre-shot routine. He describes having a very vivid image, like it was a color movie.

After Jordan Spieth’s win at Augusta last year, his coach talked about the virtual image reel they’d been working on showing Jordan’s best shots, which he could recall during play. Imaging past successful shots is actually easier than imagining new shots as you already have them in your memory. This would not only help his neurons to fire in the same way and produce similar movement patterns, but seeing that past success also helps evoke a positive mood. This is why it’s a good idea to keep a “success journal” of your best shots.

When your focus is on an image of your desired outcome, and you can keep that focus on that image (even when you’re over the ball), your focus is on something external. Golf is a hard game because you are not looking at the target when you hit the ball. When you throw a basketball you have the information of where the target is in relation to you as you make the throw. Your focus is on the target as you throw the ball, not on your body, which makes it a lot easier. This is called “external focus”. When your focus in on what your body has to do to hit the target, it’s called “internal focus” and it makes the game a lot harder. Your movement is not as fluid and free-flowing and it leads to more inconsistencies in your swing. When you’re target or externally focused, you’re a lot more committed and assertive with the action.

In golf, the best way to achieve this “external” focus and make sure you don’t have technical thoughts, is to use visualization and try to imprint an image of the target in your mind so you can see it when you’re not looking at it.

Tiger Woods used to say that he could still see the target when he is looking at the ball. Nick Price said he felt like he had a camera looking out of his left ear which allowed him to see the target in his mind as he looked at the ball.

In between golf shots

90% of the game of golf is in between shots. What you think about during this time can affect your mood, your tension levels and your execution of the next shot.

Visualization can help you manage this time. If you find staying in the present in between shots (the ideal place to be) difficult, you can use visualization to take you take you to a calm place, to help you stay relaxed and avoid thinking about something stressful. This is especially useful when you’re under pressure in tournaments.

What you visualize in this case is a personal preference, but it could be a favorite vacation spot or spending time with friends, anything that is going to make you feel relaxed.

Conversely, if you think about something that is stressful to you, it’s likely that your heart rate will increase and your muscles will become tense.

To make a swing change you need create new neural pathways and make that change part of your “muscle memory”. Neural pathways are what connects your brain to the muscles. You can also think of it as carving a groove in your nervous system for the signals to flow along and activate only those muscles needed for the action.

Visualization is a key factor on this. When you try to make a swing change, it’s important that you try to imagine what that looks like before you do it. Ben Hogan would sometimes spend hours hitting balls in practice without hitting many shots, because he was using visualization to help him learn a new movement in his swing.

Each time you make that particular movement, the neural pathways are strengthened and you’ll more likely be able to access them on the course.

I want you to imagine playing a chip shot from about 3 yards off the green. You’ve got about 30 ft of green to work with and most of it is down-hill right to left. The pin is out. Assess the shot and play it in your mind. See everything about it.

Bonus question:
What did you look like as you were playing the shot?

If you hadn’t thought about any of these things, then you need to improve your visualization!