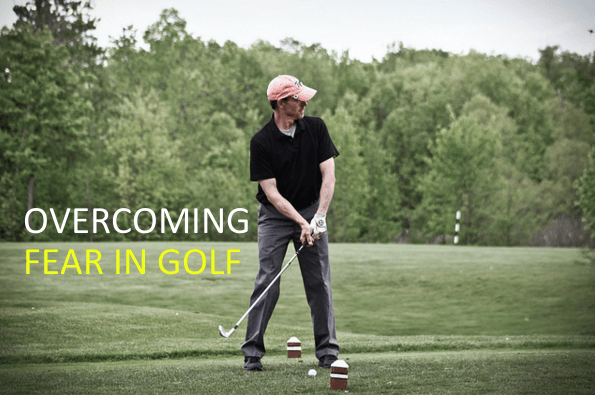 Generally speaking, FEAR is an instinctive emotional response to imminent danger. If you don’t know the mental game techniques to control it, that emotional response quickly turns physiological in the form of a racing heart, loss of focus (panic), fast breathing, tension in the muscles and sweating.

As humans, we’ve had the same mental and physiological responses to fear for over a million years. We cleverly evolved to have an automatic response which helps us protect ourselves when something is threatening our lives. In prehistoric times this was helpful in the face of a large predator like a Sabre-tooth Tiger or fighting another tribe.

But, for some bizarre reason, that same response is triggered today by things as (relatively) trivial as a game involving a stick and a little white ball. And for most of us, it creates an even bigger challenge in a game that is already very difficult! It’s like nature still wants to see who really is “the fittest”, even in modern times when our survival is very rarely threatened.

“Fears are nothing more than states of mind.” – Napoleon Hill

What is there to really fear in golf?

One of reasons golf is such a popular game is because you get to feel a range of human emotions, without any real-life consequences. And fear is one of them. In the same way that some people love roller coasters and scary movies, golf provides us with a virtual playground. Having your heart in your mouth as your ball barely carries a lake to land safely on the green, is fear and excitement all rolled into a shot that lasts a few seconds.

But is there anything to truly fear in golf? Or are us golfers a crazy bunch putting way too much emphasis on how good we are at playing something we call “a game”?

Overcoming fear in golf requires understanding and accepting exactly what we are fearful of.

What do you fear most in golf?

It’s probably (at least) one of the following:

What does fear do to you?

This all sounds pretty bad, doesn’t it? But is there anything positive about fear? Or should we try to avoid it at all costs?

The positive side of fear

“Fear is excitement without the breath!” – Fritz Perls, founder of Gestalt therapy

It turns out there’s a “healthy side” of fear, one that drives us to win and become better players.

A top golfer’s fear of failure is probably different to an amateur. Fear of failure to Tour players doesn’t represent a loss of respect from their peers or what people will think of them, but a real fear of not winning, or not fulfilling their potential. This is healthy fear. It motivates them.

Tour pros want to win. They want to win majors, break course records and see their names on leader-boards as often as possible. Not because they derive their self-esteem from it, but because they are competitors and thrive in the competition. I’m not saying that some Tour players aren’t egotistical, but to get to the level they play at requires a motivator far greater than how they look in front of others.

As we’ve seen in previous articles I’ve written on this subject, if you can get control of nerves and fear in golf, you’re on your way to playing better under pressure.

If you can direct the hormonal and physiological changes that occur during stress in a positive way, you get the ingredients for an extraordinary performance. Your perspective of the “stress” is that it’s a positive challenge, not a negative threat. Your senses are heightened and the fighting spirit is used to take performance to a new level.

For most elite players, pre-competition anxiety is almost a prerequisite to playing their best.

To get control of your fear, you need to ask yourself some key questions:

What is it that you fear? Why do you fear it? Most of us don’t really know why it is we’re nervous.

What is it you want out of golf? What really motivates you to succeed?

Do you derive your satisfaction from what other people think of you as a golfer? Is your success tied to your self-esteem, your status in the game and impressing others? If so, this is an unhealthy fear and you’re too emotionally invested in the game to reach your full potential.

Ways to conquer fear in golf

Throughout the 10 years I’ve been working as a mental coach, I’ve helped my players conquer fear with a whole host of techniques. All have been included in the Ultimate Mental Game Training System, which you can gain access to below.

Thanks for reading. I hope this article sparks a few questions ahead of your next round or tournament and helps you use that nervous energy and your fears to propel you great performances. 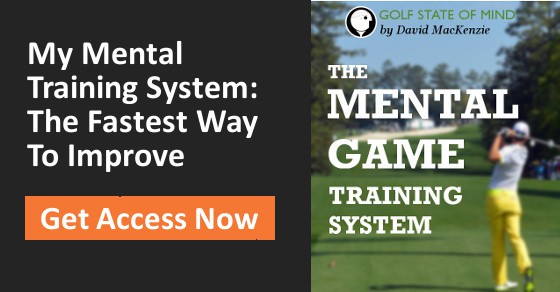