Your reaction to the outcome of shots can be a major obstacle in getting better.

We all hit shots that we don’t intend. It’s part of the game. But to call a shot bad, you have to judge it as so, which will affect how you play, resulting in more bad shots. The way to get better is to get to a point where you don’t even acknowledge shots as bad – you accept that they are part of the game and quickly put them behind you and move on to the next. This lesson is going to show you some proven techniques to do this.

As Dr. Bob Rotella says “Golf is not a game of perfect.” Not even the best players in the world can hit every shot how they would like. When you watch the golf on the TV at the weekend, you’re seeing just the cherry-picked shots, the extra special ones that are not the norm. The reality is that even tour players miss the fairway and green with an average of 1 in 3 shots. The difference is that (when they do) they accept that: a. it’s part of the game and b. it’s pointless dwelling as it only takes a second to get mad and have it affect the next shot.

Responding poorly to shots by getting angry, even just a little, can affect your mood for and create tension ahead of the the next shot, which can then snowball into further negativity and loss of focus. When you’re thinking about the past (your last shot), you’re not in the present giving whatever you are doing (enjoying the walk in between shots or thinking about the next shot) your full attention.

The best thing we can do is give every shot our best intention and then manage our reactions (quickly).

I’m not saying that you should forget your mistakes. You need to be constructively critical about your performance in order to improve those areas of weakness. But save it until after the round! On the course, take a positive from EVERY shot and move on quickly. Try these techniques to calm your mind if you’re disappointed with a shot or bad hole:

In golf, there really aren’t any bad shots, just shots that you can react badly to. Just as in life, getting angry or upset at something that is now out of your control (the past) is only counter productive and can affect You actually learn more from playing badly than by playing well, which is a good thing to remember when it’s not going so well out there. After every round, you are a more experienced player, no matter how you play. Play with these things in mind and you’ll more easily deal with the adversities that a round of golf throws at you.

Stayed tuned for the next step in the process: “How To Visualize and Feel golf shots and trust your subconscious”. 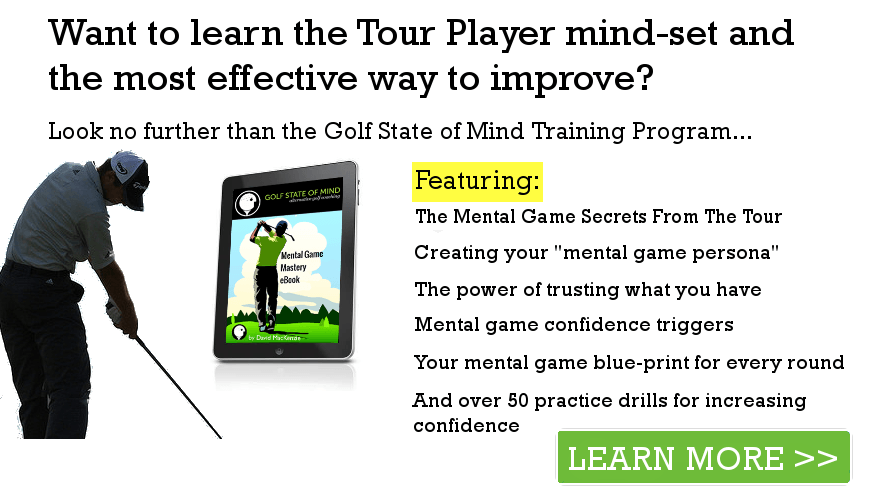