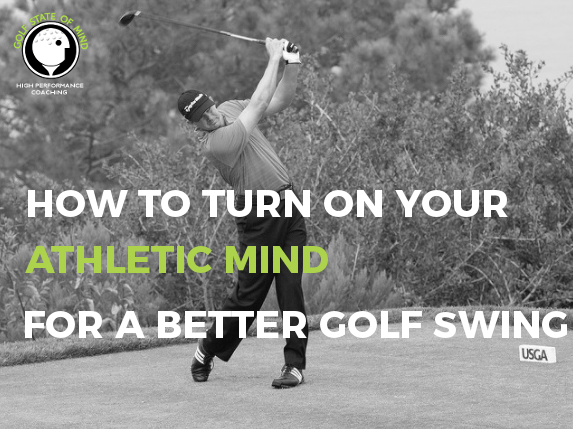 Despite what some people say about golf, it is an athletic sport. However, many golfers still play it like it isn’t and this holds them back. In this article, I’m going to show you how you can change your mindset to produce a better golf swing, especially under pressure.

What do I mean by an “athletic sport”?

In the same way a tennis player hits a volley or a soccer player kicks to score a goal during open play, the golf swing is an athletic movement.

What is an athletic movement?

An athletic movement is one which is fluid and uninhibited. In sports such as tennis and soccer, this is easier to produce as there’s very little time to think about it. The tennis player is simply looking at where on the court they are going to hit the ball and they just hit the shot. The soccer player who is closing in on goal, will take a look at where the goalkeeper is, and simply kick the ball at a target in the goal. The same athletic movement is very possible in golf, if we know what to focus on…

Golfers think too much

Most golfers don’t know when (or how) to stop thinking, and this really affects how good they become.

Well, let’s “think” about this for a second…

The reason that golf is a more difficult game than others, is because there’s so much time to think. 90% of the game is spent not “playing”, meaning we have so much time to think about our swings, to ruminate decisions and mistakes, and how we’re going to play the next shot.

I’m not saying that all thinking is bad in golf – one of the many great aspects of the game is that every shot is different – the terrain, the wind and weather…each shot presents its own set of unique challenges, which require you to think about the best strategy and type of shot to hit.

Thinking is also good in (block) practice – learning a more efficient and better golf swing requires consciously thinking about your movement, to improve it.

But most golfers, don’t know how to turn off the critical/logical thinking mind and access their “athletic mind”, so they can make a more “athletic” movement during their swings.

Research shows that your best, most coordinated movement comes from “not-thinking”. In the studies that have been done using EEG (equipment to measure brain activity), the results show that the better the player, the less overall brain activity there is during the golf swing.

Why does it work this way?

When an athlete is performing their best, there’s direct communication between the senses and the movement centers of brain. You will also have heard this state of mind referred to as “the zone” or “flow state”. In martial arts, it’s called “mushin”, which means “no mind”.

When an athlete is performing their best, they are not preoccupied by thought, judgement or emotion. There’s no sense of self or “self-consciousness”. The mind is focused 100% on the present (there is no past or future).

What’s happening in the brain during fluid motion?

The prefrontal cortex is the part of the brain which is responsible for managing complex processes like reason, logic, problem solving, planning, and memory. In golf it’s great during the planning phase of your pre-shot routine, but it can easily become that “little voice in your head” when you are over the ball. To produce a better golf swing, and get into the “flow state” or “the zone”, that little voice needs to be turned off and the athletic mind turned on.

When the athletic mind is active, the brain is more open to sensory input. In other words, you can take in more of your environment. In martial arts, the fighter (in “mushin”) is just “sensing” and is totally aware of their surroundings. This gives them a greater ability to anticipate their opponent’s moves.

In golf – think about how focused you feel when you hit certain shots – you have a really clear vision of what you intend – the shape of it, the feel of it, where it’s going to land etc, and then you pull it off, perfectly. This is what happens when your athletic mind is turned on and your critical mind is switched off. Your body is able to “react” to the intention (and target) you have set for the shot.

This is precisely where we need to be in the “trust phase” of the shot routine, from when you start your walk into the ball to the end of the shot.

How can we do a better job of turning on the athletic mind?

There are several factors that go into how well you are able to turn on your athletic mind, that go beyond the shot routine and that’s a big part the work I do as a mental coach for golf. However, during your pre-shot routine, you can try these:

Focus on your breathing

Focusing on breathing is proven to reduce activity in the thinking part of the brain (the prefrontal cortex). Breathing is (generally speaking) a key part of athletic performance and it also helps reduce tension in the muscles and gets oxygen into your system.

Focus on your senses

Focusing on your senses is a great way to connect with the present and turn off the critical mind. Notice what you are seeing, feeling, or hearing as you walk into the ball. Experiment with focusing on one of your senses in particular and see what works best.

There are many more ways we can get your into your “Optimal Performance State” which I can take you through in my Ultimate Mental Game Training System, but simply becoming more aware of where your attention is and whether you are still “thinking” all the way through the shot, will help you produce a better golf swing more often.

Give this a go and please let me know how you get on with it. 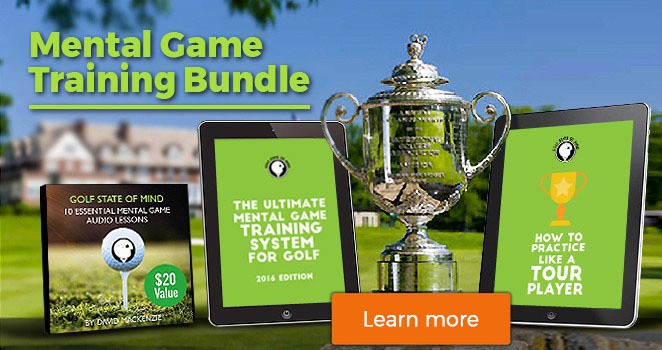