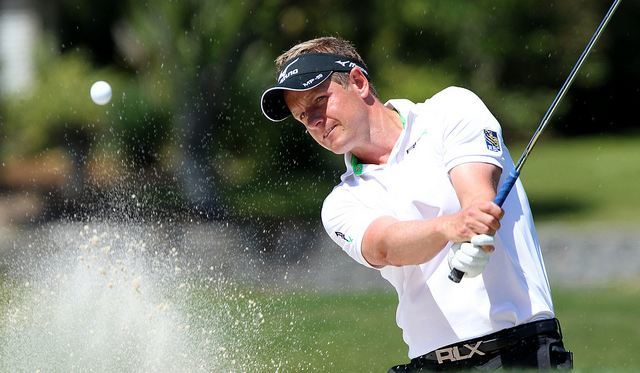 When I was a child learning to play golf, my father and I used to spend a fair amount of our practice time together hitting out of bunkers. I never questioned his methods but in hindsight he was “saving” me from the mental and physical stresses of hitting out of a bunker. Today I am grateful to him for teaching me how to hit out of the sand because now when I play I don’t panic when I hit it in the bunker. Honestly I prefer to stay out of the bunker but if I am faced with a bunker shot I step into the bunker with confidence.

In previous articles I have written about the lower body involvement while hitting out of a bunker. You need to maintain good knee flexion which helps you stabilize the lower body. One physical restriction inhibiting our ability to get grounded and keep the knees bent is the lack of hamstring flexibility.

Let’s look at the importance of proper wrist hinge in your downswing and bunker play.

The wrist hinge position in your downswing helps you harness energy. As the arms move in the downswing, the angle of the wrist to the forearm becomes smaller and then begins to widen at impact. The correct wrist angle is critical because it creates lag and load in the downswing. When the wrists unhinge at the correct moment the club head speed increases. This “wrist lag action” during the downswing, when the right elbow reaches the right hip and hands come to waist height, the hands begin to release the club shaft moves towards the ball.

The wrists unhinge after impact and the forearms pronate and supinate from the backswing position and release towards the target. When we loose this angle at the wrist, we loose power.

Now let’s focus on the action required in the hands, wrists and forearms.

Wrist / Finger Stretch
Begin on all fours placing the wrists directly under your shoulders. Spread your fingers as wide as possible. Note: Try to spread your fingers so wide apart that you can fit a golf ball between each finger. Gently shift your upper body weight slightly forward and backward until you feel the pressure more in your wrists. Repeat five times in each direction.

30 Second Forearm Speed Drill
Stand tall with one arm extended and supported by the other arm. Spread the fingers as wide as possible and make a tight fist. Repeat this action as fast as possible for thirty seconds, rest and repeat three times. Switch sides. You will feel the “burn” in the hands, wrists and forearms.

Wrist Roll – Pronation And Supination
Pronation refers to the rolling open of the hand and forearm, supination refers to the rolling closed position. Place your club in your palm, extend your arm and roll your hand, wrist and forearm towards the ceiling (pronation). Roll your arm in the opposite direction (supination) Repeat ten times and switch sides.
Note: Focus on the action originating from the hands, wrists and forearms, not your shoulders.

Wrist Flexion And Extension Drill
Place your right hand on your grip and with the “V” of the thumb and forefinger facing you. Extend your wrist towards the floor. Pull your wrist back towards you, focusing on the “cocking and un-cocking” of the wrist. Repeat ten times and switch sides.

When Rory first came on the professional scene about 7 years ago, he was what…

It Is Never Too Late – Fitness and the Senior Golfer

Fitness for the senior golfer is a key part of game improvement. When Jim, a…