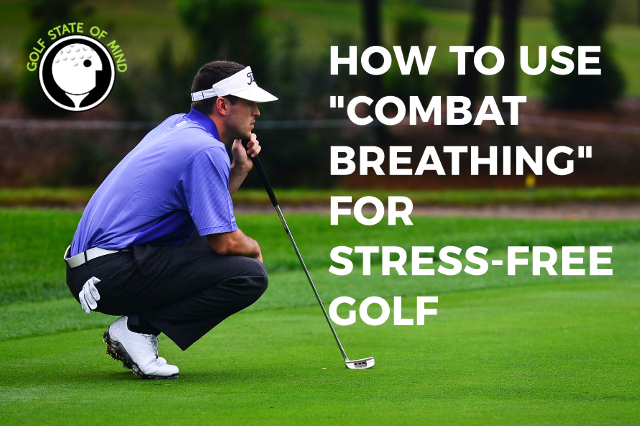 When you’re feeling nervous from fear of losing, fear of not playing well, fearing of hitting a bad shot or fear of embarrassment etc., you probably notice certain changes in your body and mind which inhibits your ability to play your normal game.

The reason is that your body is in what’s called the stress or “fight or flight” response. The hormone adrenaline is secreted by the adrenal glands which results in:

This is obviously not conducive to playing your best golf!

To reduce the effects of the stress response and the additional adrenaline in your system, we need to steady the ship and tell our brains that everything is OK. The best way to do this is by using powerful breathing techniques for golf.

The “Combat breathing technique” (also known as the “box breathing technique”) is used by the Armed forces and Emergency Response personnel to deal with the effects of increased adrenaline in combat and emergency situations. It’s very simple and here’s how to do it.

Many successful public speakers, athletes, theater actors etc, will use powerful breathing techniques such as this to reduce the shakes, lower tension and regain control of thinking and ensure a good performance.

Next time you’re in a tournament or you feel nervous on the golf course, try the combat breathing technique along with good body language and you’ll see the stress and nervousness melt away.

Focus your attention Imagine a simple exercise. Roll up a piece of used paper and…

How To Avoid Choking In Golf

Here's a tip that's tangible that will improve your scores over time. The area where…