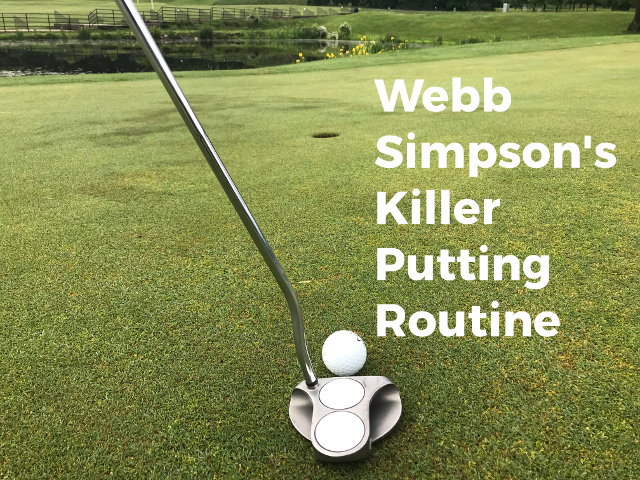 If you watched The Players Championship a couple of weeks ago, you couldn’t have failed to notice how well Webb Simpson putted throughout the tournament. In his third round, he had 19 putts in his first 16 holes, which is incredible putting, even by Tour player standards.

The reason? He attributes it to re-working his putting routine – to be shorter, more intuitive, and most importantly, “with less thinking”. In this lesson, we’ll take a look at some ways you can change your putting routine for more confident putting and fewer strokes on the greens.

What you’re focusing on during your putting routine is going to affect the outcome. Even the best players in the world can focus way too much on mechanics and try to control each putt with the “thinking” (left) side of the brain, instead of using the intuitive (right) side of the brain. For me, putting is more of an art than a science, and if we can all connect more with the artistic side of our brains, we’ll experience a more confident putting stroke and lower scores.

Good putting is less about technique and more about learning how to use your senses and developing feel, which is why any level of player can become a good putter. A 16 handicapper has an average of 36 putts per round vs a scratch player’s 31. That’s 5 strokes per round that can easily be shaved off with simple changes in your mental approach and more effective putting practice drills (more random and competitive drills and practice of the routine).

The Art Of Putting

Good putting is about using your senses – visual, feel, sound etc. The more we can visualize a putt like it’s a movie, the more your body will know what to do during the stroke. That’s the best way to get the ball started on the right line and roll it at the right pace, instead of over-thinking and focusing on mechanics.

While you’re rehearsing a putt, ask yourself this: what does this putt look and feel like? Some of you might even like to anticipate what it sounds like. When you do this, you’re putting this sensory information into your subconscious mind which it will use to create a stroke to match it.

In the last few seconds before starting the stroke, that’s when it’s really important to have the “thinking brain” switched off and let your subconscious play the putt, based on the sensory inputs we’ve given it during the routine. The more thinking, the more interference with the senses there will be. Stay connected with what you are sensing and start your stroke as your eyes come back to the ball – to keep the process athletic and free from conscious thought. We don’t want to stare down at the ball for too long and become static and disconnected from the putt. We want it to be “reactive”.

In a study that was done by the University of Birmingham in the UK, they measured the time of shot routines of European Tour players (over 22,000 shots recorded). The conclusion was that those players who had quicker routines and spent less time over the ball, had a 50% better chance of making the cut – proof that shorter, more reactive routines are better than longer ones with more time to think!

As a mental coach for golf, I’m always paying attention to the shot routines of the world’s best players. I noticed Webb Simpson’s putting routine at The Players being quicker and more “reactive” than normal. Any level of player can learn from it – you can’t argue with those results! Webb has climbed to 5th in Strokes Gained Putting, up from 88th last year. Let’s take a look at it in this highlight reel (below) from the final round of The Players Championship. Notice how it’s the same for every putt (and full shots), 2 looks and then go!

Are you a Spot Putter or a Line Putter?

Curves vs Straight Lines Whenever I discuss pre-putt visualization with a new student, they will…

If you’re needing some help with your putting this season, look no further than my…

“Look And React” To Putt Better Under Pressure