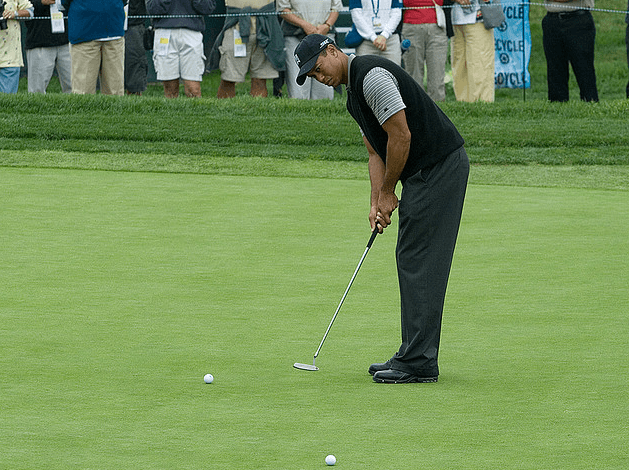 Across putting greens all over the world, numerous golfers will practice their putting by dropping three balls and putting away. While I have become desensitized to this act, I still ask myself, “Why three balls?” Perhaps the new sleeve of three balls just perpetuates the agreeableness of the number three (three blind mice, the triple play, bad things happen in threes, etc.), and people feel the need to maintain social regularity. Or perhaps most people just fail to prepare properly, and they don’t think about what they are actually doing.

The purpose of all practice should be to transfer your skills onto the course, but the three-ball routine has to be one of the worst ways to practice. The last time I checked only one ball is played in competition. Plus, practicing with three balls actually provides a false sense of confidence.

Hypothetically, let’s say all three balls stop close to the hole, but what does it actually improve? Because all three balls were putted in about the same spot, the line and speed are already known, thus eliminating two of the major factors in putting. Lastly, most will only rarely remember whether the three balls ended up either short or long. For instance, if someone putts all three balls close to the hole but short, then the player will most likely leave putts short on the course, too.

Everyone practices putting, but how many players approach putting practice with a purpose and a goal? One way to transfer the putting green mentality onto the course is to become creative and competitive with the practice. Help create pressure situations by using only one ball, emphasizing putting competitions, having goals, and developing and reinforcing feel.

In this week's lesson, I'd like to show you how to do more effective golf…

On the golf course and in tournaments: Every shot counts and has a consequence Every…

Pressure is a very important part of any practice session. The more you can simulate…