Two English players have set the pace at this year’s Masters. Both are seeking their first major win and neither have held the lead or co-lead after any round of a major.

Yesterday, easy pins and calm conditions meant that we saw veterens Fred Couples (50) and Tom Watson (60) at the top of the leaderboard.

Today required a lot more patience and shot making, and that’s exactly what we saw from Westwood (world number 4) who picked up 4 shots (with an eagle on the 2nd) in his first 7 holes. Had it not been for an eratic drive on the 14th and a resulting double bogey, he would have surely held the two round lead on his own. 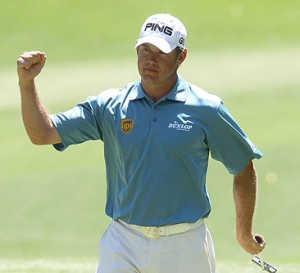 “It was a grinding day, danger lurks everywhere and you have to keep your wits about you,” said Westwood.

Westwood has had his fair share of near misses in majors, finishing third in both the Open Championshipand USPGA last year. Consistently one of the best players in Europe, he certainly has the game to win.

The ever-confident Poulter (world number 7), who by winning the World Matchplay Championship has won already on US soil this year, says that his second round was one of the best he’s played in a while. His second sucessive 68 has given him a great chance of his maiden major victory. 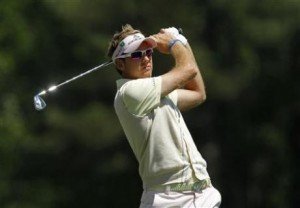 The last Brit to win a major was Paul Lawrie in 1999, who capitalized on Jean Van de Velde’s collapse at Carnoustie. With such an abundance of talent in the British Isles, it has been a long eleven years. Both Poulter and Westwood have the experience and game to win a major, and being friends it might help that they are paired together on Saturday.

With so many great players within a few shots of the lead, it is set up for a fantastic weekend of golf. Who knows which Augusta we get tomorrow, but if Tiger is still on the leaderboard come tomorrow evening, there’s a very strong chance of him picking up major number 15 and have the press talking about his golf instead of his personal life.

Fred Couples Shares some of his Secrets of Success in Golf

"Everybody teaches a system. I just try to shoot where I'm aiming. I play by…