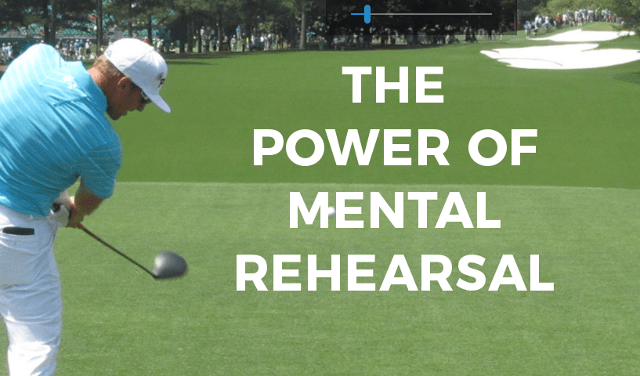 “I think that mental rehearsal is every bit as important as physical rehearsal.” – Phil Mickelson

A question for you: What do you intend to happen in your next round?

Do you have positive intentions in mind, or are you thinking about what you don’t want to happen?

The images you put into your mind can have a big influence on the actual outcome in anything you do.

One technique that all the top players I’ve worked with (or interviewed) have used, is mental rehearsal or “positive visualization”.

What I mean here is visualizing (imagining) your future success. In this article, I’m going to share a little of the science behind how and why it works, and how you can use it to perform better on the course.

Jack Nicklaus said that he believes that 50% of his success was down to having imagined it before it happened. Muhammad Ali, said he would mentally rehearse all his fights and see himself victorious, before the real event.

Why does mental rehearsal for golf work?

The research that has been done on this area of cognitive psychology and neuroscience shows that there are many similarities between how the brain processes things that are real and imagined. E.g. imagining saying a word stimulates the same area of the brain as actually saying that word out loud. The same goes for movement. So how does this help us as golfers? It means that we can do a lot of work on our games, by using mental rehearsal! If the brain has already practiced what you need it to do, it will be (more) ready to do it for real in your actual round.

In any activity you do, whether it’s a presentation at work or an important round of golf, you will usually perform better if you feel prepared. For a presentation you would probably rehearse it several times before the real thing. In the same way, you can get even more prepared for a round of golf by rehearsing it in your mind. This will give you a (much needed) sense of familiarity and comfort when you are actually playing.

It quietens your mind before a round

If you focus on what you don’t want to happen before a round or shot, it’s going to cause stress, tension and fill your head with negative mental chatter. However, if you focus on a positive intention i.e. images of you executing your plan exactly as you intend, this will lower stress and quieten your mind.

It can sharpen your skills

Functional equivalence is a theory that proves that imagined actions have the similar “internal representation” as actual (real) experiences. An example of this is the work done by Dr. Richard Suinn with Olympic Skiers at the University of Colorado.

As part of a research experiment, Dr. Suinn had a group of Olympic Skiers close their eyes and imagine going down a specific down-hill ski run. After performing the exercise several times, he attached electrodes to the bodies of the skiers and had them repeat the exercise. What he discovered, was that the muscles that would be used for real were “firing” at the same time as the skiers imagined turning to go through gates on the ski slope. In other words, they were stimulating the same muscles they would use on a real run, by simply imagining it!

What does this mean for golf? That you can practice your technical skills, without actually being at the course of the driving range! Rumor has it that, during practice, Ben Hogan would sometimes spend a long time before each shot visualizing his intended movement – the idea being he would accelerate the changes he was making to his swing. In this excerpt of Motor Control and Learning and Dr. Tim Lee and Dr. Richard Schmidt suggest that mental practice can make physical practice more effective.

How do you do it?

Before I explain how this is done, I should mention that there are 2 ways to see yourself in these visualizations. First person (or associated perspective) and Third person (disassociated perspective). First person is where you visualize what you will actually see playing, and third person is where you see yourself as if you you were on TV. Research suggests that first person is better for visualizing an event that has not yet occurred, and third person is better for reviewing rounds that have already been played. This exercise can be done daily, or at least the evening or morning before you play.

Mental rehearsal can also be used during your goal setting and obviously before you play each shot on the course.

Physical limitations – clearly if you’ve never hit a high draw before, then visualizing it before your round is not going to help you hit it. You need to have the physical skills first, but using visualization in practice can certainly help you develop them.

If at first it’s not easy, keep persisting. As with anything it gets easier with practice!

Visualization: The Most Powerful Thing In Golf

“Visualization is the most powerful thing we have.” – Nick Faldo The Golf State of…

5 Ways To Use Visualization To Lower Your Scores