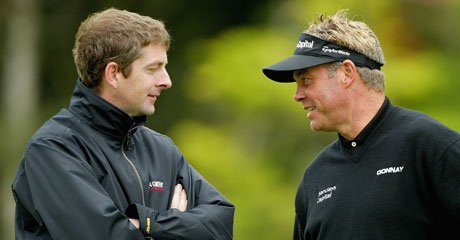 Hi, It’s Karl Morris here and it is great to be working with you courtesy of David MacKenzie at Golf State of Mind.

It is really clear to me the need to understand HOW to get the best from your mind is the central key to becoming the best golfer you can be. In David MacKenzie, you have a coach who really understands and applies that simple but profound truth.

I hope you enjoy the read and be sure to give David your feedback.

The Myth of Positive Thinking In Golf

“All you need to do is go out there and think positive!!”

“Just believe you are going to shoot a low score!!”

I am sure you have all heard that nugget of information time and time again over the years. The ‘power’ of positive thinking is a phrase enshrined in our collective psyche.

But, does ‘positive thinking’ actually work for everyone?

Does it really make a difference to your success?

What has your own personal experience been towards the secret of positivity?

Could it be possible many of us have been led to believe something which for a lot of people could be doing more harm than good?

As I have found working with players on a one to one basis over the years, what sounds like a great mindset doesn’t always deliver for everyone. For some golfers, being super positive can produce some incredible results. Ian Poulter being a perfect example. But it is NOT a cap that fits EVERYBODY.

Trying to make everybody ‘think positive’ is a bit like saying everyone should play a draw with every shot. Yes, it may be great for some people but trying to hit a draw when your natural mechanics favor a slight fade can limit your game.

Let’s look at the principle of positive thinking through the eyes of a golfer who is struggling on the greens.

Unfortunately, not! That little spike mark just in front of the hole destroyed all of those positive vibes.

This scenario continues most of the way around the golf course. Despite all of the positivity, that damn little ball doesn’t seem to want to play the same positive game.

In many ways, this particular example mirrors so much of life, in that the world just doesn’t seem to want to bend to our will in the ways we believe it should. The problem with our golfer is he will keep trying to be positive, the ball doesn’t go in and then the dam bursts and he switches from positive to the ‘I give in, I just can’t putt’ stream of negativity.

Again, like a lot of people who try to be positive we do it for a while. The results are often less than what we want and then we jump the fence, give up and go into the negative camp. Positive thinking in golf may not be effective for all but clearly neither is being negative and giving up.

The problem with ‘positive’ thinking is much of it is actually a PREDICTION of a future we CANNOT be certain of. We can hit the ball at the hole, but we cannot be certain of the outcome because there are just too many variables on the green and in life in general. We can tell ourselves we are going to get the job, make the sale or whatever it is but the outcome is a variable and NOT under our control. Positive thinking in golf is a mind out in the future convinced of a particular outcome. The problem with these predictions is, if they don’t come true in the way we would wish, then our mind tends to flip over to being negative and pessimistic.

So, if positive doesn’t work and we clearly don’t want to be negative, then where on earth do we need to send the mind? What is a useful and productive mindset that has some longevity?

It doesn’t sound as sexy as positive thinking but over the years one of the most powerful strategies on the golf course and in life in general has been the concept of what I call ‘Neutral Thinking’. To be able to sit in a neutral space just dealing with the here and now and giving you a way of thinking and an approach to life that is both resilient and liberating from the positive – neutral loop of insanity. How do you get into neutral?

Well, there is one word I have found to be perhaps one of the most powerful in the English language and is the perfect bridge into the world of NEUTRAL.

Picture our golfer on the green again, he is playing the fourteenth hole, he has missed almost every putt up to this point but he is faced with a 12 foot putt and, instead of telling himself ‘it’s going in’, he asks himself a very simple but profound question, ‘Is it POSSIBLE I could roll this ball into the hole?’
Just think about that.

Very subtle but dramatic in the sense the positive thought of the ball going in the hole is a FUTURE prediction of an uncertain outcome. The question is it possible I could roll the ball into the hole is a present based assessment of CURRENT conditions.

“Is it possible I could hit a golf ball 500 yards into the wind?”

“Is it possible I could hole this putt?”

You are not telling yourself it will go in and setting up for a failure and then a downward spiral, you are asking a very simple question about the current situation and giving yourself the opportunity to do the best you can.
The ball may or may not go in the hole but at least you gave yourself a chance, you embraced the art of the possible. As a very wise coach once said to me, the bravest thing you can do on a golf course is to stay open to possible.

When you keep asking the possible question, you stay grounded in the reality of unpredictable outcomes but it doesn’t stop you from moving on and taking on the challenges the game throws at you. The outcome may be good or bad, the ball goes in or it misses, but this then only affords you the opportunity to ask another POSSIBLE question.

As long as you are prepared to deal with the outcome and keep asking the possible question, you will develop mental toughness for golf. A mind that isn’t predicting the unpredictable but is prepared to keep going when others fall by the wayside and give up. I have seen golfers transform their game simply by understanding the power of neutral and, often when I talk about this in my seminars at clubs, there is often a sense of relief there can be another way to approach the game other than just ‘trying’ to be positive.

Lose Your Ego and Gain a Better Golf Game

On the golf course, the average golfer is very quick to attach their self-worth to…

How To Look and Feel Like A Tour Pro

In this article, I'd like to show you a couple of easy ways to increase…

7 Mental Golf Instruction Tips For This Weekend’s Round

1. Forget about Score and Get In The Zone Write your score down for each…