“Golf is a game best played in the subconscious.” – Alister MacKenzie, designer of Augusta and Cypress Point

What do you focus on during your swing on the golf course?

Is it keeping your head down or your left arm straight? Or is it the timing of your wrist cock or making a good turn to the top of the backswing? Whatever it is, you might want to think about leaving it on the driving range.

In a recent survey of 24 PGA Tour players, 18 said they didn’t think about anything at all during their swing, while those that did have a swing thought said it was to focus on a spot a few inches in front of the ball, to encourage swinging through, instead of hitting at the ball. NONE of them said they had ANY technical thoughts about their swing. So if this is what the best players in the world are doing, should you not do it too?

Obviously a Tour pro has less reasons worry about mechanics – they work on their games day in and day out and have ingrained solid, repeatable swings. But whether you are a weekend or tournament player, a good golf swing needs to be an aggressive, athletic action, not pieced together by a series of “correct” movements. Ben Hogan said he wished he had 3 right hands as it was his right hand that eliminated tentativeness caused by over-thinking swing mechanics and instead gave him the aggressive action that led to his phenomenal ball striking.

Does a Football or Basketball player think about how far and at what angle they take their arm or foot back while taking a shot? No, they don’t. The more you try to control your action, the harder it is to perform that action. Think about something you do without thinking, like driving a car. If every time you got in your car you started to consciously think about what you were going to do just before doing it – check mirror, watch speed, indicate, look out for pedestrians crossing, speed up again etc, you would probably lose focus on the road and have an accident. Instead, you do it in your subconscious. The same applies to golf, the less you think while you’re swinging the better your swing will be.

Here’s a practice drill for you:

1. Hit a dozen balls as you normally would and focus on a technical swing thought
2. Hit another dozen balls, this time (after visualizing the shot and having a clear target) say 1-2 in your head on your swing. “1” all the way to the top, and “2” through the ball. This was made famous by Tim Gallwey back in the 1970s it’s still considered to be one of the best for removing technical thoughts and maintaining a good rhythm.

See what the difference is in the shots.

If you want more Mental Game Practice Drills, then you’ll like my new eBook, Tips and Practice drills to Master The Mental Game

The desire to control the swing gets stronger, the more errant our shots become. There is a tendency to try and prevent the action that caused the last bad shot during the swing. We’ve all been there and done it. But how did that work out? I’m sure it made things worse, which is proof that trying to fix a swing fault during your round, or even worse during your swing, is very counter-productive. 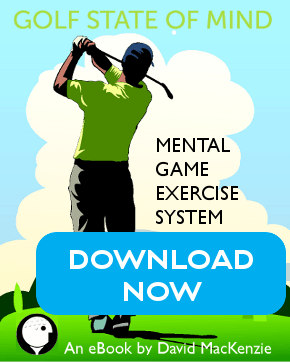 Leave the swing thoughts for the driving range and truly connect with the shot you are about to hit. Become immersed in IT not the action required to produce it. You have plenty of time to do all your “thinking” during your pre-shot routine by going through good preparation: fundamentals, visualization, and shot selection etc.

Keep your process going quickly and keep seeing the shot until your “go trigger” to tells you it’s time to make a confident, thought-free, aggressive swing at the target.

Why not make “thought-free” swings a goal for your next round? It’s always better to make process NOT results your goal. Give it a go and let me know how you get on.