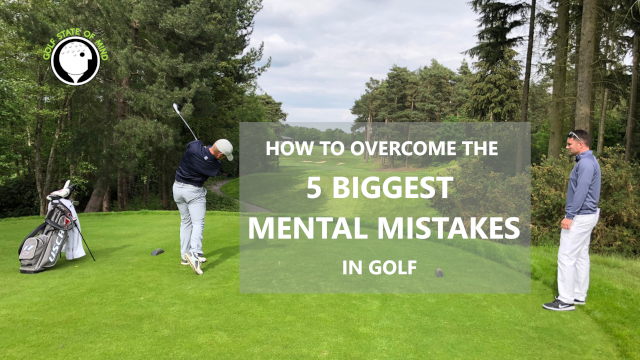 Most golfers lose too many shots each round, not because their technical skills desert them, but because of mental mistakes that cause changes in the swing and putting stroke.

In this article, I’m going to cover what I consider to be the 5 biggest mental game mistakes that golfers make and how to overcome them, so you can get access to your best technical skills more often.

“Setting” your mind before a round is key if you are going to give yourself the best chance of playing well. Too many golfers put pressure on themselves to play well by setting expectations around score and the end result of their round. They think that if they don’t play (score) well, there has been nothing gained. When I ask a new student what their are goals for a round, they will typically say things such as “shoot in the low 70s”, “keep 3-putts off the card” or “to hit at least 50% of fairways” etc. All that these “outcome” goals do, is add pressure to the player and inhibit the freedom needed to focus and play tension-free.

A winner’s mindset is different. Sure, they have the belief that they can win and play well, but they don’t put pressure on themselves to do so or to avoid mistakes. Instead, they accept that the outcome is not completely within their control and all they can do is control what they have 100% control over – their focus during each shot, responses to shots, body language, self-talk etc. If they can achieve these “process” goals, they did all they could to maximize their chances of success. They also know that whatever happens in a round, it’s a learning experience. It’s not all about the result, it’s more about what can be learned to make them a better player in the long-term.

For many golfers, a few bad shots causes them to focus more and more on their swing and they get more and more “internal”. Instead of engaging with the target (being “external”) and engaging with the shot, there’s more focus on what the body should be doing during the swing. When this happens, tension increases and tempo and rhythm changes meaning the swing is different each time (producing a different outcome for the shot).

A golfer is always better off being “athletic” and focusing on the intention for the shot, than what the body has to do to hit that shot. Sure, there can be some (a little) conscious awareness of the swing, but in the seconds before you start your back-swing, you have to be fully engaged with the intention, not prevention of mistakes or what you need to do physically to hit the shot. It should be the shot that makes the swing, not the swing that makes the shot!

Thoughts are constantly entering our minds every second and will quickly disappear unless we choose to focus on them. Scientists tell us that we have between 50,000-70,000 thoughts per day and over 2/3 of them could be labelled as “negative”. Most golfers miss a few shots or have a high score on a hole and then start paying too much attention to those negative thoughts that enter their stream of consciousness.

If you choose to give a thought more power and allow it to grow, it can quickly turn into feelings and emotions that change your mood and affect your play.

Being more aware of your thoughts and what you are focusing on is called “mindfulness” and it’s something that many of my students practice. “Negative” thoughts are inevitable in a round of golf. We all have them. The trick is to not give those negative (or “dis-empowering”) thoughts power and turn them into Self Doubt and Negative Self-talk. Instead, be an observer of your thoughts, not a participant. Let them flow and disappear without paying attention to them.

Note: This isn’t about avoiding the things you fear – there’s plenty of time to look deeper into the causes of performance anxiety after a round.

When we do this, we can miss valuable learning opportunities and ways to improve our play. There is always a cause and effect of every golf shot. There’s a reason you hit some shots to the target and some shots that miss. I prefer to think of no shots being “bad” shots or “mistakes”. There are shots that are good, or good enough, and then there are shots that are learning opportunities. Instead of reacting to shots you consider “bad” and starting to think that it’s “just not my day”, look at them more objectively and choose to have a more neutral, constructive response. Asking questions such as “Did I go through my mental process?”, “How deep was I into (committed to) the shot?”, “How good was my tempo?”, “Was I aware of any tension?”

In the same way I wouldn’t want you to judge your rounds by your score (the outcome), do the same with your shots. Becoming your best player-self requires focusing more on what is learned, than the result of a shot or round.

Note: If you believe it was a set-up issue or a swing fault, re-play the shot as you would have liked (obviously the ball will no longer be there) and rehearse that movement before your next shot. Make sure you don’t make Mental Mistake #2 and start getting over-analytical or thinking about your swing during your shots!

Even when I do an initial playing lesson with an elite level player, they can sometimes fail to be 100% committed to their shots. When this happens, there is no clear message to the muscles to make the necessary movement, and make it fluidly. Without a clear intention there is also less focus over the ball, allowing time for doubt and outcome thinking to creep in, again, this will send mixed messages to the muscles that are making the swing or stroke.

Whatever level of player you are, it’s imperative to have a clear intention for every shot you hit. Players like Jack Nicklaus and Johnny Miller say they would be able to visualize shots in vivid detail (down to the number of bounces the ball would take).

Practice this: Before you start you walk towards the ball, verbalize the intention for the shot to yourself. Is it a low, medium or high shot? Draw, straight or fade? On what line will the ball start and where will in finish? How much release or spin will it have?

What Is Your Mental Game Strategy?

To learn more about strategy and playing your best, watch this brief animated video on…

The Ten Commandments Of Mental Golf