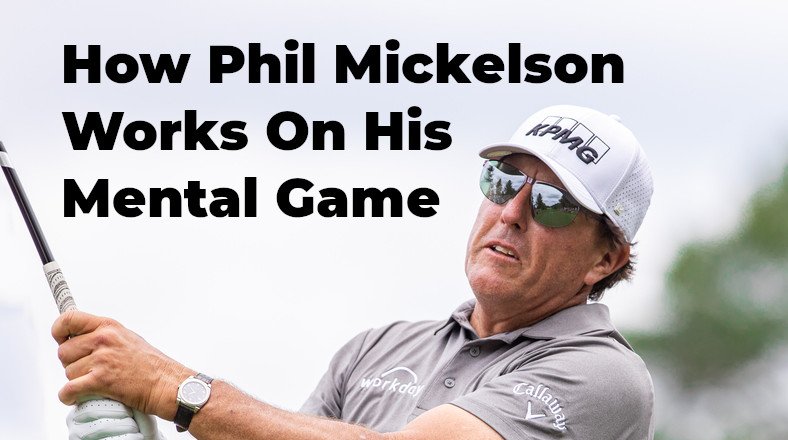 After Phil Mickelson’s incredible win at the PGA Championship, he spoke about some of the techniques that he’d been using to prolong his career and become the oldest winner of a major at the age of 50. The longevity of Phil’s career (his first PGA Tour victory was over 30 years ago) is not only because he stays physically strong and flexible, but because he strengthens his mental game too. He said:

“I’m trying to use my mind like a muscle and just expand it”.

Whatever goals you are pursuing, whether in golf or otherwise, here are 5 mental skills that you’ll need to hone if you are to achieve them.

In this article, we’ll take a look at how he:

1. Phil improved his focus and ability to be present

“I just wasn’t sharp…I stepped in there, I was going to hit a draw, standing over it, I’m going to hit a fade and I just made an awful swing, lunged forward on it.”

At The PGA Championship it was different. Phil Mickelson’s Pre Shot Routine was focused and deliberate – he thought through each shot , slowed himself down and created a clear picture. He was focused and present to the shot that was in front of him, nothing else.

Phil said afterwards: “I’ve tried to stay more in the present and at the shot at hand and not jump ahead and race. I was just trying to quiet things down because I’ll get my thoughts racing and I really just tried to stay calm.” (Source ESPN).

Competitive golf can generate so many thoughts that clamber for our attention and try to pull us from the present and what’s most important. Major championship golf amplifies that by thousands.

Being able to let unhelpful thoughts and doubts pass and be focused on the now during the Pre Shot Routine (for all 4 days of a tournament) is a vital skill to playing your best golf under pressure, but it requires daily practice.

Although the Pre Shot Routine is an effective way to switch on your focus and give each shot your best, what happens in between shots makes a big difference too.

The “in between” shot time is what can make the game such a mental challenge. In order to conserve mental energy and stay calm and optimistic, you’ll need to be able to switch off your “golf brain”, in between shots. The mind is a predicting machine and in pressure situations it can race to thinking about all the possible outcomes which can cause performance anxiety. Sensing that Phil was struggling with this, his caddie (and brother) Tim Mickelson, stepped in:

“I just told him to stop thinking so much…When he would get ahead of himself, I reminded him, Hey, we’ll worry about that when we get there. A few stories here and there. Maybe one or two might have been made up, who knows, but anything I can to keep his mind off of the shot that’s coming up when it’s not even our turn to hit.” (Source golf.com).

So how did Phil work on his ability to focus on the shot at hand and stay present? He made longer meditation sessions a priority, he chewed gum throughout his rounds (which some experts say improves focus and lowers tension) and he played more rounds of golf each day (sometimes 45 holes) requiring himself to focus for every shot for each round.

During the PGA Championship it was clear to see that Phil was standing behind the ball for long enough to calm himself down. After the tournament he said that he was using controlled, deep breathing techniques for about 10 seconds to lower his heart rate and stay focused on the image of the shot.

Elite level players are aware of their heart rate and know that if it gets too high it can cause a drop in focus, higher tension levels and inconsistent tempo.

Being able to control heart rate and arousal is another aspect of your performance that you should practice. Deep controlled breathing gets oxygen into your system which causes your brain to think that everything is under control and there’s nothing to fear. The proper techniques activate the sympathetic nervous system which works against the fight or flight or parasympathetic nervous system (calming everything down).

3. Phil had a clear picture and made aggressive committed swings

Phil said: “I felt I had a very clear picture on every shot. Physically I feel like I’m able to perform and hit the shots that I’ve hit throughout my career, and I feel like I can do it every bit as well as I have. But I’ve got to have that clear picture and focus,””

Having a clear intention for a shot is a prerequisite for good golf as it gives the necessary inputs to the motor system and more “automaticity” in the swing. There are different ways to “visualize” and create this intention – different personalities and learning styles connect with their intention in different ways that communicate with their motor system more effectively. Whatever technique you use to “visualize”, you’ll need to find out what’s best for you to make committed swings. Without this essential part of the pre shot routine, you open the door to distraction and passive “steery” swings.

4. Phil kept true to his internal goals and intrinsic motivation

In his post tournament interview, Phil talked about how he has always been “intrinsically” motivated, meaning that his true drive is his love of the game, getting better and competing. It’s that motivation, that has led to the achievement of external goals (trophies, money, majors, etc.).

I have to remind my students of this, especially the younger ones, who can fall into the trap of thinking success is all about good scores and where they place in a tournament. Real success is about loving the process of getting better and getting the opportunity to learn from competing – not whether you get a successful result. This perspective to golf makes external goals easier to achieve, because you are more focused on the process of improving and playing well and less on the outcome or if, which creates pressure and distraction.

Phil said, “This might be the last tournament that I ever win. But I might win several more.” He’s clearly comfortable with the fact that we can’t control the future and we don’t know what we will achieve. Although it’s good to have goals and know where you’d like to go (and why), I prefer what meditation teacher Jon Kabat-Zinn calls “non-striving”, where you are fully present to what you are doing in that moment, you’re not constantly doing something to achieve a future outcome or heightened state. When all your energy is in the present, you are giving 100% of yourself to what you are doing which opens up the possibilities.

There’s no point in wasting energy speculating when that energy can be spent honing skills and learning. For Phil, the primary goal is not to win more tournaments, but to keep a beginner’s mindset and stay on the path to mastery. If he continues down that path, he increases the chances of more wins.

As I say to my students, you have to love the journey more than you love the destination.

Phil has spoken in the past of using a “mental scorecard” to measure his attainment of his “process goals” in his rounds. With future outcomes unknown and uncertain, the best goals are ones that keep you present to each moment and focused on what will help you hit each shot as best you can and accept the outcome whatever that might be. This is an integral part of the mental game training system, which helps you determine which process goals (focal cues in your rounds) are the best for you. We simplify each round – instead of trying to shoot a good score, we go out there with simple goals for each shot and the score becomes the product of that. You’ll be surprised at what you are capable of with this approach.

In golf at any level, there are many ways that you can squeeze extra shots…

Mental Game of Golf Tip: Go With The Flow.

Your Daily Routine To Improve Your Mental Game of Golf