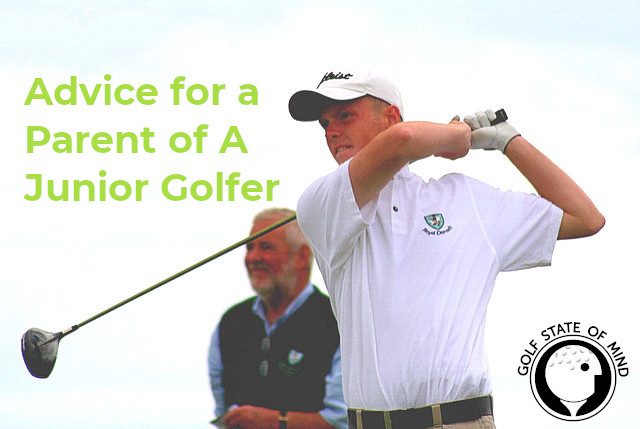 Having been a mental coach to many junior golfers throughout the past 10 years, I’ve had plenty of experiences of witnessing how a parent of a junior golfer can affect a player’s ability to access their potential, when the pressure is on.

I’ve seen junior players virtually in tears during rounds because they are not playing to the high expectations set by their parents, coaches and themselves. But it doesn’t have to be this way, and as a parent of a junior golfer, you can help take pressure away and watch them play with confidence, when it counts.

From what I’ve experienced, junior golfers under-perform for the following reasons:

So many parents of junior golfers think they are helping their son or daughter progress, when in fact their behavior is causing mental weakness in their child during competitions. In this article, I’d like to show you a few of the areas you can improve your approach if you are a coach or a parent of a junior golfer.

1. How A Parent Of A Junior Golfer Can Help Lower Expectations

Expectations and goals are two different things. Future goals which represent improvement are a good thing. Expectations to achieve goals and go out and shoot a good score are not. This is why performance in golf is usually cyclical – a player will shoot a low score, or win a tournament, and then expect that same success in the next round or tournament. The bar gets raised and finishing below it is viewed as a failure. Expectations create pressure and put too much focus on the result and future outcome, which as you’ll know if you’ve read my Ultimate Mental Game Training System, increases pressure, tension and panic (performance anxiety).

When a parent of a junior golfer tells their child: “I think you’ll win today”, they think they are helping them feel confident. But what they’re actually doing is increasing expectations, and the chances of a poor performance.

As part of my mental coaching for junior golfers program, we set goals (and measure the success of rounds) that have nothing to do with score. When a player sets out to achieve these goals, instead of shooting a good score or winning a tournament, the results are significantly better.

2. How A Parent Of A Junior Golfer Can Shift Focus Away From (Uncertain) Outcomes

One of my students called me before a tournament last week, and told me how afraid he was of not playing well in front of the dozen or so Division 1 NCAA college coaches that were going to be watching.

I reminded him that who was watching and the final outcome was out of his control and the only thing he needs to focus on was the process goals we set, controlling his nerves and staying present in between shots. Through the confidence we had built in this process over the past year, he was able to stay focused on what was most important and he succeeded. But who knows what the college coaches took away from it!

When you find your junior focusing too much on what will happen if they play well or poorly, it’s important to remind them that they can’t control the future and instead to focus on those things that they can control.

3. How A Parent Of A Junior Golfer Can be Supportive After A Round

Many parents of junior golfers invest heavily in their child’s game and there’s obvious frustration when they don’t see progress in the results. I know one parent who spends in the region of $60-70k on his son’s golf game each year (coaching, equipment, travel, hotels and tournament entry fees).

Hence I hear this a lot “Coach, I know my son is way more talented than most of the other juniors in his age group, but they always beat him in tournaments. We need to change this!”

Kids are smart and can sense this frustration. The time that it’s usually most apparent is during the car ride home. The parent’s frustration of yet another disappointing tournament after all the time, money and energy that goes into it is, more often than not, guiding the conversation and untimely criticism. “Why is it you can’t play like you do in practice during these rounds?” is a question that gets asked. The junior typically withdraws, gets more frustrated and feels even worse than they do already.

The best thing a parent of a junior golfer can do in these situations is let the junior initiate a conversation about their performance. If they want to talk about it, fine, but if not, allow them to change the subject to something that will make them feel better. If they want to talk about the round, try to be as compassionate as possible and listen! Allow them to feel frustrated and don’t try to fix anything. Constructive feedback is better received the next day when the emotions have subsided.

What’s most important is to not allow a junior feel like they are letting you down by their play. It’s isn’t about you, the parent. If a junior ties your happiness to how well they play, this will massively increase pressure, and they will struggle to perform to their potential. It’s far more important to ask them what they learned than focus on their score.

4. Put more pressure on them during practice

Learning how to overcome adversity and cope with/reduce performance anxiety is an important part of the process of succeeding in tournaments. We can use the feedback from their rounds to improve these skills, but they can also work on it during practice. The practice sessions I set up for my junior players involve focusing more on the process (routines) and putting them under pressure to improve how well they control tension, heart rate and their focus when under pressure on the course.

Tiger Woods’ dad, Earl, would try to distract Tiger and put him under pressure when trying to hit shots in practice, the goal being to increase Tiger’s focus and ability to handle pressure on the course (which obviously worked). He said, “I put Tiger through a mental training program that I built from scratch, using my experience in Vietnam, prisoner of war interrogations and psychological warfare.” In my opinion, Tiger’s mental game was undoubtedly why he was so successful.

I often spend hours with a junior until they complete pressure practice drills like 20 up-and-downs or the 10 consecutive putts drill.

Work on these 4 areas and I’m confident you’ll see an improvement in your junior in tournaments.

As a mental coach, I work with junior players of all levels. Some are among…

I work with many junior golfers who regularly compete in AJGA, Hurricane Tour and regional…