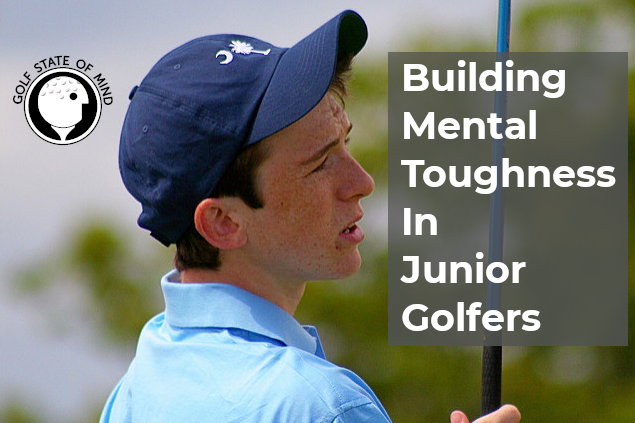 I work with many junior golfers who regularly compete in AJGA, Hurricane Tour and regional Junior PGA tournaments. Junior golf (especially in the US) is a very competitive landscape. The pressure is on for these kids to perform, which is why I’m getting more and more calls from parents. Building mental toughness in junior golfers is key to their success in these tournaments.

The most common reason for parents wanting to seek the advice of a mental coach, is because they believe their junior “lacks mental toughness”. Their junior can’t seem to play their best in big tournaments and they finish behind weaker players.

What causes under-performance in junior golfers?

Mental toughness and the ability to perform under pressure isn’t something that you’re born with, it’s nurtured by experiences and good mental coaching. What most of these parents are witnessing is less a “lack of mental toughness” but the effect of the parent-junior relationship. There is a right and a wrong way to be the parent of a good junior golfer and in this article, I’m going to share some simple steps that parents can take to help them feel more free to play to their potential in competition.

When results are the only focus, it puts a lot of pressure on each and every shot. There’s no way to completely get away from the importance of score, but parents of junior golfers can take some of the pressure away from “shooting good scores” by rewarding (praising) the effort that a player puts into their on-course “process” and mental approach, rather than the end result. This way, the player is encouraged to focus more on those things that are going to help them most on the course, instead of living and dying by the outcome of every shot.

Instead of just looking at numbers, we need to understand what they’re doing (mentally) when we’re playing their best and try to get them to repeat those things. This is an important part of my post-round review process. My players use a mental game scorecard to judge each shot by the quality of the process rather than where the ball went, which improves their focus on these steps during rounds (and improves performance).

With all my students, the first thing we focus on in a session is “what they did well” (no matter what their score was). If all you highlight is their mistakes (and seem frustrated by them) it will make them fearful of making more of them and getting the same response. Praise the good shots and put together a constructive plan to work on weaknesses (of course weaknesses need to be addressed by the coach and player). Adopt an approach of “more encouragement, less criticism” and reinforce the positives. Perhaps get into the habit of just enjoying the car ride home without talking about golf, instead of making it about the normal round review, when the junior has no choice but to listen. Perhaps arrange a time the next day to review the round which gives them a little time to process what happened.

3. Don’t let them sense your disappointment

A lot of the juniors I work with tell me that they are afraid of what their parents will think and say if they play badly. When they hit a bad shot, they immediately look over to their parents to see their reaction and they can tell (by their facial expressions and body language) exactly how they feel. This fear of a negative reaction (and desire for a positive one) has been conditioned over years of seeing their parents in a good mood when they are playing well and in a not-so-good mood when they are not. With some of my players it’s reached the point where they no longer want their parents at the course, and in some cases this has been the turning point in that player’s game in competition.

Be careful with your reactions. Try to be level headed instead of riding the emotional roller-coaster (that your junior is already riding inside) and let them feel unconditional support no matter how they are playing. After a bad round, try to empathize with how they feel instead of telling them what they did wrong and how they can do better.

4. Teach them how to fail

Dealing with adversity and learning from mistakes is a life skill that will transcend golf. Junior players need to understand that failure is part of the growing process and adversity needs to be embraced, not feared.

Making mistakes is a more effective (and quicker) way to learn and improve than trying to avoid making mistakes.

One of my players was in the lead in a major junior tournament recently with 2 holes to play. But after a 4 putt on the 17th and a bogey on the last hole he ended up finishing 3rd. Naturally disappointed at letting the tournament slip through his hands (which I empathized with), I explained to him the importance of going through that experience (even though painful) and its importance of taking his game to the next level. A little pain is ok, to get them thinking about making changes and building mental toughness.

Don’t make your junior afraid of making mistakes. Fear of failure is probably the biggest cause of under-performance but failure is part of getting better – it makes you tougher in the future!

5. Work on their mental skills with a mental coach

As a parent of a junior player, it’s your job to offer unconditional support and encouragement but the coaching should be left to the coaches. I’ve had plenty of success with junior and college players and have a proven system for building mental toughness in junior golfers. If you would like a free consultation and information about my mental game assessment and one on one coaching, please use this link: Book a free session with me, David MacKenzie.

Why You Need To Redefine Success For Your Junior Golfer

“Success is peace of mind, which is a direct result of self-satisfaction in knowing you…

Advice For A Parent Of A Junior Golfer

Having been a mental coach to many junior golfers throughout the past 10 years, I’ve…