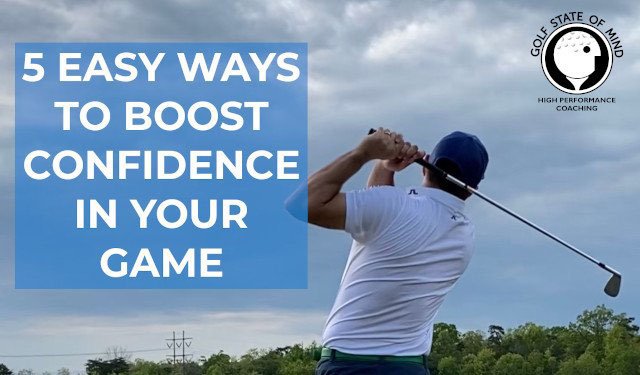 Being able to get the best out of your game on any day has a lot to do with how well you can activate and maintain your “best performance state”. What I mean by that, is the mental, emotional and physical states that when combined, give you the best opportunity to play well.

Sports psychologists use the term: “Activation”, to describe strategies that help a player trigger their best performance state. Finding the best activation techniques for a player requires ongoing reflection and work with the player, but in this week’s lesson, I’d like to give you some ideas.

Whenever I start working with a new student on mental coaching for golf, I ask them to think about times they’ve had success and how they would describe themselves (mentally, emotionally and physically) in those moments. The words they use can be very helpful in putting together an activation strategy.

I was speaking to a new student this morning, who told me that when she had her 3 wins on Tour, she was “cocky”, “determined” and “walked with a swagger”. She said that she was definitely more intense than relaxed.

How would you describe your best player self and how you felt while executing certain shots? Who is the player that you want to be when you show up to the course or to practice?

Take yourself back there and write down some words that come to mind about your “state”.

How does activation work?

Triggers for our mental, emotional and physical states are all around us. I’m sure you’ve noticed that when you hear a song or smell something that it can take you back to either a positive or negative event in the past (it’s usually a time when there was high emotion). Activation is about knowing what state we are trying to recreate and determining what triggers will activate it.

Activation strategies can become a great “controller” during a performance. We can use them as needed depending on the time in the round or the situation. E.g. the state required to hit a good drive might be different to the state to make a 5 ft putt.

1. Self talk and verbal cues

Words and phrases can have a very powerful effect on some players in changing their state (for better or worse). Words such as “strength, power, dominance, relentless, winner”, etc. can be used as motivation or to increase energy. Certain phrases or statements can be used to positively affect body movement depending on the shot you are about to hit. E.g. using words such as powerful, balanced and strong might be great to say before hitting a drive, whereas words that are more conducive to hitting a good short game shot might be “soft, relaxed and floating”.

If I was to ask you to imagine your best friend or your best-ever vacation, your state would immediately change because of your emotional connection to those images. We can do something similar to enhance performance. Seeing yourself be the player you want to be before your rounds can help you become that player on the course. Imagining the best shot you’ve hit with your 7-iron before your tee shot on the par 3, can change your state into a confident and optimistic one, freeing you from doubt. Imagining something calming in between shots can help if you are feeling anxious and stressed.

Looking confident and excited to play the shot (if that’s the state you are looking to recreate) with your body language and facial expressions can help you create that performance state.

Many players use music to create a feeling or mood before their rounds and during their warm-up, but it doesn’t have to stop there. If you feel that certain types of music help you feel confident and powerful, then try using them in your pre shot routine as you approach the ball. Just like words, certain songs might be better for driving (more upbeat, stronger), while others might be better for the short game and putting (softer, less beat).

The concept of having an alter ego as an activation strategy has been around for many years. By acting as if, players can access those behavioral qualities, which they show when they are at their best. Try to come up with a model player or animal which represents those qualities. For example, I was speaking with a student this week who says that he’s like a competitive, focused, Justin Thomas when he’s at his best. So using the words, competitive, focused and acting like he’s Justin Thomas can activate that performance state. Kobe Bryant used to become “The Black Mamba”, which embodied everything he wanted to be when he was on the court. This evolved further into Mamba mentality which was all the qualities that Kobe became famous for: his work ethic, trying to be better every day, being fiercely competitive, etc. So becoming the Black Mamba whenever he would get to practice or play, would help him exhibit those qualities. Who is your Alter Ego?

As I said at the beginning of this article, finding the best activation strategies for you requires exploration and experimentation, but these ideas are a good place to start.

How To Close Out A Match

Dr. Glen Albaugh is a leading sports psychologist and the author of "Winning the Battle…

What an incredible finish to The Open Championship 2017! Or I should say what an…