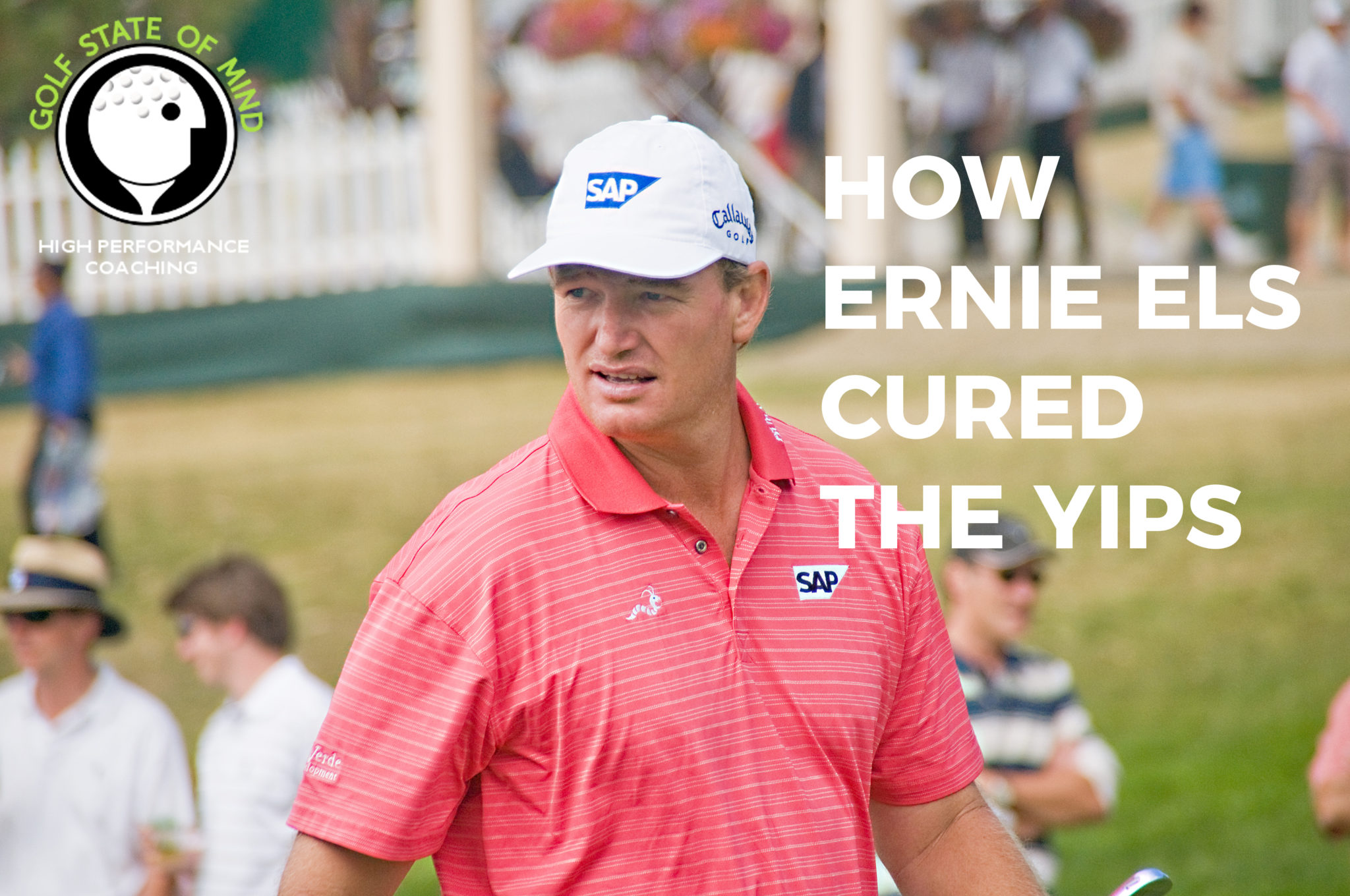 Curing the yips is something that I’m asked about every week.

Ironically, the yips typically affects better, more competitive players who are used to scoring well, which worsens the performance anxiety brought on by it.

Even major champions are not exempt. You might remember Ernie Els 6-putting from just a few feet on the 1st hole at Augusta in 2016. He said, he got a bad case of the “heebie-jeebies” and “just couldn’t take the putter away from the ball”. We know exactly what it was. Apologies if this video is painful to watch but to get to the solution we have to understand the causes!

During an interview after the 2016 Masters, Ernie said, “I don’t have the yips. That’s a different deal. That’s like neurological. Mine is a lack of confidence. I need to see the ball going in the hole and I wasn’t seeing it. I’ve read up on all this — and I don’t think I have it. No way. It’s emotion. Anxiety.” (Source ESPN.com)

Curing The Yips: How Ernie Els Did It

I would agree that Ernie doesn’t have “neurological” yips, especially because he hasn’t had any notable issues with the putter since, and he hasn’t changed his grip. What Ernie Els experienced was yips caused by performance anxiety. If you don’t know what “type” of yips you have, you can find out in my free course: Curing The Yips.

Ernie showed us at The Masters that performance anxiety is often higher over “easier” shots, like a putt within 3 feet. The fear of missing those easy ones (and throwing away shots and being embarrassed), can make even the most seasoned golfers look unsure and exhibit a very twitchy stroke.

After he missed a couple of short ones, he probably started to think about the embarrassment of it all and his self-talk probably became, “am I ever going to get the ball into the hole?”

Stick to a solid routine to cure the yips

You can see in the video that Ernie completely abandons his routine and seems more focused on what the putter is doing than his intention for the putt (he also stares down at the ball for a good few seconds each time, instead of “looking and reacting”). Once he missed the first short one, he would have been much better off focusing on proper breathing techniques and going through his routine (which should include deep engagement with the intention).

Ernie said a few weeks after, that when the yips started taking hold, it was because he was completely focused on a negative outcome, instead of being “process focused”. He said:

“Augusta was really bad. But I’ve gotten more in control of it. I’ve been really practicing and really trying to get into a routine where I’m on the 72nd hole or the first hole or the 15th hole, it’s the same feeling. I’m trying to work toward that. I’m getting better.” (Source ABC News).

The players I work with who successfully cure the yips develop very SOLID shot routine, or “Process” that is the measure of success for each putt/shot. Your process is what you are focusing on before, during and after every putt (or shot) and it needs to be the same every time, whether it’s a putt for birdie or double bogey. When we make the process the goal, not the outcome, there will immediately be less performance anxiety and better putts.

But what works for one player might not work for another, so it’s important to experiment with various things when building your routine. Practice it during your practice time (in practice you are “training your brain”), so that on the course it’s automatic and all you have to focus on is executing the “process goals”.

Give it go. It worked for Ernie, so it could work for you.

Cures For The Chipping Yips

How Do You Cure The Yips?

In order to find your cure for the yips, it’s important to first know exactly…