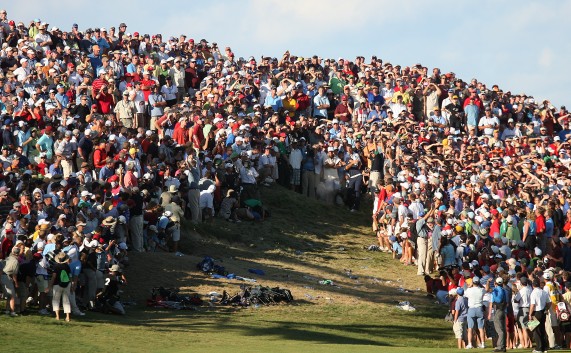 In what was one of the most memorable and entertaining majors of all time, the 2010 PGA Championship has left most spectators feeling a little sick. Without taking anything away from Martin Kaymer‘s unflappable performance, whether Dustin Johnson‘s penalty on the last hole was fair, and what might have been, are the questions we are left with. A local rule cost a young player an opportunity to win his first major.

The rule states that: All areas of the course that were designed and built as sand bunkers will be played as bunkers whether or not they have been raked. This will mean that many bunkers positioned outside of the ropes and some inside the ropes, close to the rope line, will likely include numerous footprints, have tire tracks during the play of the Championship. Such irregularities of surface are a part of the game.

Can this rule be any more vague? Was the area where Johnson played his shot from an area “built as a sand bunker”? Clearly not. With the traffic that area of the 18th would have seen during the final day, how was the player expected to identify whether or not that area was a “bunker” or whether it was sand moved by the thousands of feet during the day? Agreed, the rules are the rules, and Dustin Johnson (or his caddie) should have questioned it and asked for a ruling there and then. But in the chaos of that situation it would have been far from his mind without it being glaringly obvious that he was in danger of a rule infringement.

The 10 minute debate that ensued after Johnson putted out, made it clear that it was far from apparent whether he was or was not in a designated bunker. Under such special circumstances, why could a rules official have not warned him about this as he approached the ball? And even when he had finished, surely the rules commitee has the discretion to rule in favor of the player? Ultimately the rule was just far too confusing, especially for a player having to make par to win his first major. The PGA are sticklers for the rules, but how about injecting a little humanity when a less than obvious breach occurs on the 72nd hole of a major?

A similar fate awaited Stuart Appleby, who was hit with a 4 shot penalty for the same thing when the 04 PGA Championship was hosted at Whistling. Appleby said last night:

“I’m very pissed and angered that this is way the 2010 PGA came to an end.
It was listed in many parts of the caddy and player areas of this unique rule for the week.
Dustin and caddy are ultimately responsible for their actions….but WTH
I think that they need to make significant changes to the course that has hundreds of pointless bunkers that patrons have to walk through to view players.
The PGA says that their a part of the game and to be treated as hazards.
Never seen patrons walking through bunkers in any other professional event (world wide) try that at Augusta.”

Clearly it’s time for a rule change. It’s just a tragic shame that it took the last group on the 72nd hole to bring it to the PGA’s attention. The silver lining to this dark cloud is that Dustin Johnson missed that putt on 18. When asked afterwards, “Do you feel like something was stolen here?” Johnson replied, “Maybe a little bit. But, you know, that’s how it goes.” Had he holed out to win his first major, it would have felt a lot worse than that.