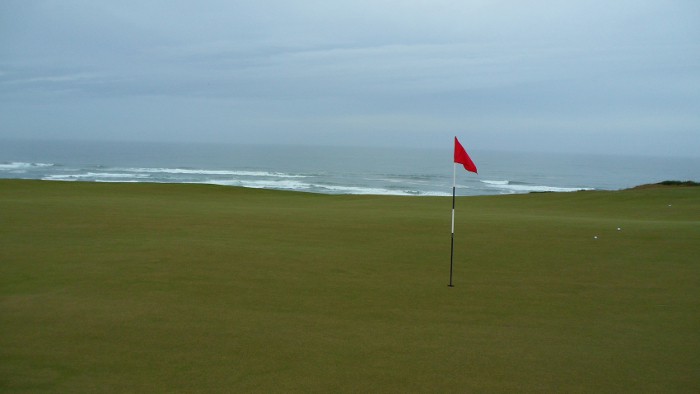 One fact remains: No matter how good or reliable your stroke is, you have to read the putt correctly. And reading the putt involves both speed and direction. Reading speed and direction involves feel. And feel involves confidence. All of these must be working perfectly for the putt to have much of a chance to go in.

That, by the way, lest we forget, is the ultimate goal of any putt. Of all the above factors confidence is the most important, and it should only be governed by the golfer’s mind, not by the technique of a putter anchored against the body, especially on the competitive level. The whole purpose of lining up a putt and figuring out its speed and direction is to give you confidence which determines how hard you hit the putt. For it’s the force of your blow that determines how far the ball goes beyond the hole. Even if your direction is off a bit, if your speed is right, you won’t have much of a putt coming back.

The greatest green reader of all time, with the possible exception of Young Tommy Morris, was Tiger Woods from 2000 to 2009. That and his distance control with short irons accounted for most of his 14 major wins. I don’t think Woods ever saw a putt, during that period, he didn’t think he could make. He was in a state of mind beyond mortal confidence. Nothing could touch the state of mind he was in. He got to the point where his performance even decreased the confidence of other competitors. They figured his 10-footer would drop even before it dropped. And it usually did drop! That kind of success gets into your competitors’ heads, and any stray thought that enters the head of a player who is putting is bound to lead to doubt, which leads to indecision, which translates to the nerve endings of the hands and fingers and thumbs. You’ll sink a few, but not near enough to win. It’s kind of what Tiger is dealing with now.

Clearing the mind is what the Buddha did on a early December about 2500 years ago. Once he got his pace and direction down, nothing could stop him as he sat beneath a fig tree, finally opening his eyes and the seeing the face of freedom in the morning star at dawn. He woke up, and kleshas, or hindrances, would no longer affect him as before. If Buddha had been a golfer, living in a later time, he would have won everything in sight.

So how do you attain this state of equanimity where you sink more putts than you miss? Let’s back up a bit, for in golf, how you hit the previous shot affects how you will hit your present shot. So first, hit your approach shot as close to the hole as you possibly can. A subsequent putt is better than a chip. And a 20-foot putt is better than a 50-foot putt. A three-foot putt after a chip is better–much better–than a 15-footer for par. So one key way to increase your putting confidence is to improve your approach game, your chipping game, and your lag putting game. Most pros are good with their short irons, around the greens, and at putts from 5 feet and in, so they can power a 25 footer a few feet past, making sure they reach the cup, and have confidence they will sink the come-back putt, especially if they’ve watched the line as the ball passes the hole. Since there usually isn’t much break right around the hole, they can then hit short putts firmly, (unless it’s severely downhill) putting through any minor break.

Second, concentrate on feeling your putting speed. Some say good putters are born not made, and I think this is true. But you can practice getting a feel for distance. My suggestion would be to experiment with a long, languid stroke, with a backswing twice as long as the forward stroke, which you should feel as a pop off the club face. Your objective is to hit the ball hard enough to get it past the hole by about 18 inches. That’s a virtual tap-in and doesn’t cause your knees to knock. Now, at first, this may result in more three-putts than you bargained for, but patience will be rewarded in time. For each time you go too far past the hole, that feel is registering in your nerve endings. Experiment on the practice green. Purposefully, hit it too hard, just to feel what that feels like. Hit it too lightly, for the same reason. Never up, never in, is an expression that we all have experienced first hand, cursing ourselves in the process. “You had the line. Just hit it, Alice” (sorry, ladies, but it’s what we guys say…still). You don’t have to study Pelsian physics. Just spend some time on a putting green, trying all sorts of permutations and combinations.

Finally, change your routine. If you’ve plumb bobbed for a long time, ditch it. If you’ve lined up your putts from behind the ball, try it from behind the hole. You will see an entirely different perspective, a truer perspective perhaps. Feel the green with your feet to get a sense of the break. Take the ocean or the mountains or the heavy guy you’re playing with, into consideration. Check the course’s stimp on their website. Anything 10 or over is fast, so on downhill putts, just get the ball rolling and let gravity be your friend. Use an anchored putter. I have a feeling they’re going to allow amateurs and even pros on the Champions Tour to use them, thus beginning an official bifurcation of the rules of golf. After all, they are unofficially bifurcated anyway, and should be. The PGA pros play an entirely different game than you or I.

One of my Buddhist teachers, Ajahn Sumedho, always told us not to just take his word for how to live our lives. Experiment, he said. Buddhism is about being kind to yourself and others, while finding your own truth. Same with golf: Except there the truth is found at the bottom of a cup and the sound the ball makes falling into it.

“Seal the deal” for better putting

Do you struggle with lag putts? Are you generally good a putter, but crack under…

Have You Tried The Tour Player Putting Routine?

Next time you watch the PGA Tour on the TV, be sure to watch what…