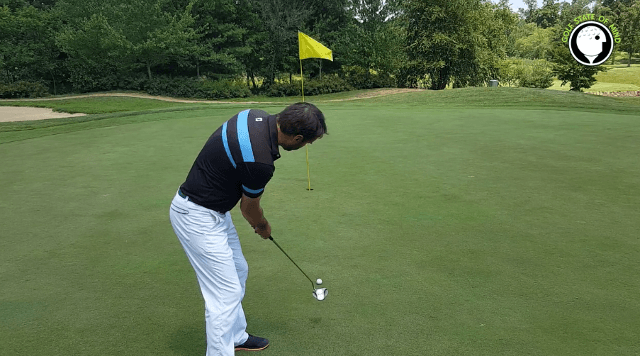 All of us are slightly different in the way we process information and use our brains but broadly speaking, we fall into one of 2 categories. Some of us are more analytical and logical (left brain dominant), and some of us are more artistic and intuitive (right brain dominant). To reach your potential as a golfer, it’s important you find a mental approach to golf that fits the way you think. What works for one player doesn’t necessarily work for another.

In putting, this will make a big difference in how you aim and read putts and ultimately how successful you are.

From my experience of working with students on their mental approach to putting, I’ve discovered that there are players that see putts in straight lines and players that see putts as curved lines. Putting Instructor Mike Shannon, calls them “linear” and “non-linear” putters. Arnold Palmer calls it “spot vs line putting”.

When a linear putter is given a right to left putt with 6 inches of break, they will aim at an imaginary hole that is 6 inches right of the hole and think of it as a straight putt. Then gravity takes the ball to the hole away from that line.

These players benefit from having an alignment line on their ball, or aligning to a spot they want the ball to roll over to get it on line.

Non-linear putters are more “right-brain dominant” – they play more by visualization and feel. They don’t like to be bound by structure and don’t think much about mechnics. Ben Crenshaw, Phil Mickelson, Paul Azinger and Bubba Watson are “feel players”.

These players see shots as movies before they hit them. They can see the trajectory of a shot and which way the ball is curving. Linear players find it hard to do this. Non-linear putters see putts as the line that the ball will take to the hole and focus heavily on the point at which the ball is going to enter the cup to help with their visualization of that line.

These players would more than likely be put off by an alignment line on the ball or spot to aim at. In fact when Bubba Watson had his PING putter re-designed this year, he had the sight line removed and replaced with a dot. He said the line was making him feel “too mechanical” and he was relying on it too much for aiming instead of trusting his natural abilities.

When you give a non-linear putt the same 6 inch right to left putt (that I described above) and asked them to aim at a spot 6 inches right of the cup, their brains would process that new target as being the final target and aim another 6 inches to the right (so a total of 12 inches of break).

“Mark O’Meara and he was one of the best aimers on a straight putt that they had ever seen. However, on a breaking putt, he read 6” of break and aimed 12” to the right on a right to left putt, and did the same thing on a left to right putt. Payne Stewart had exactly the same results as did Stuart Appleby. So the group turned their focus to breaking putts and concluded there were two kinds of players on the PGA Tour; Analytical or left brain players and more freedom players or right brain. Left brain saw straight lines and were linear, and right brain saw curved lines and were non-linear. So O’Meara, Stewart, and Appleby saw their aim point as the end of the putt or stopping 6” to the right of the hole. Non-linear players look at the hole and picture where the ball is going into the cup, say 4:00, with the feel in their body. If non-linear players have a line on their ball and or putter, it actually creates a conflict between that player’s sense of sight, touch, and feel. As a result they get caught up in this conflict and just don’t make as many putts as they should. For linear players it’s ok to have a line on their ball and putter because they see straight lines and there is no conflict. “65% of the population is non-linear with 50% of that group trying to putt in straight lines and struggling. Tour players are 85% non-linear and 70% of that group is trying to use the linear approach. Good putters know which one they are.”

In other words, if you don’t know this about yourself already and you want to putt better, experiment with it and find out!

Please let me know if you have any questions or feedback.

“Seal the deal” for better putting

Do you struggle with lag putts? Are you generally good a putter, but crack under…

As mental game coach, where a player's focus is before, during and after a putt…