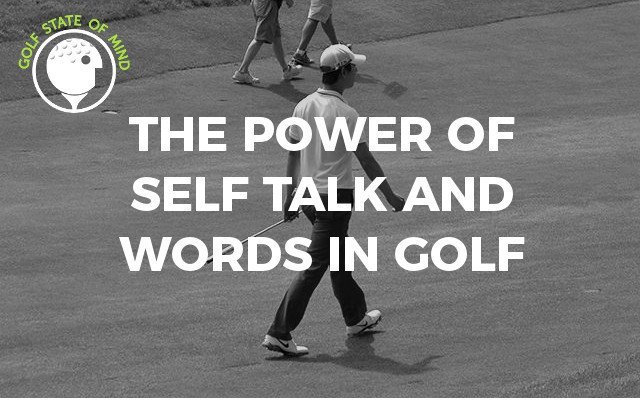 Are you aware of how you talk to yourself on the golf course and the effect it has on your play?

Most of us aren’t. We just react our way around the course, talking to ourselves without ever thinking about it.

Most golfers are quite negative about themselves during their rounds, which alters their mood, their confidence and their ability to access an athletic swing.

In this lesson, I’d like to make you more aware of your self-talk on the course and determine whether it’s helping you or holding you back.

Self-talk is Sport Psychology 101 and like most mental game coaching – it’s about creating positive habits, which you get better at over time. So let’s start during your next round!

Why is self talk and words in golf important?

Words are not simply letters of the alphabet put together. They are emotionally charged. The choice of words and tones used during communication, can elicit different emotional reactions and behavioural responses. In fact, top salespeople use specific “trigger words” during their sales pitches (without you knowing it) to make you “feel” more inclined to buy their product.

So why is this important in golf? Every word you say to yourself during a round can potentially make you “feel” a certain way and get a different emotional response. The effect could be a big difference in your scores. Let’s take a look at how this works at different times during a round.

The most common time that golfers can improve the way they talk to themselves is during the “post shot routine”, after a bad shot.

I saw an interesting video recently where a Sport Psychologist was watching golfers hit balls and commenting on their shots. The players didn’t know he was going to do it, but after each shot that missed the target or was hit badly he would say, “That was awful” or “You’re playing horribly today!”. The golfers looked at him surprised, not expecting that a Sport Psychologist would say such things. But after he explained why he was doing it, they quickly understood the purpose of the exercise. That was exactly how they talked to themselves after hitting a bad shot and it felt terrible!

Choosing to respond, instead of react with negative emotionally charged language is a key fundamental of a good post shot routine.

Next time you’re on the course, make a conscious effort to notice how you talk to yourself after bad shots. Make a list of words you can use to replace the ones you currently use after you hit a shot you’re not happy with, so you don’t start telling yourself how badly you’re playing instead of simply accepting that you hit one shot poorly.

Many players I work with have a list of “trigger words” they can use in between shots to help them feel positive, confident and calm. Develop a list of keywords you can use in different situations on the course.

Let’s say you’ve just hit the ball to 15ft and you’ve got a putt for a birdie. Most golfers will start telling themselves “I’ve got this for birdie. If I can make this one I’ll be on [score].” What this does is attach emotion to the putt/shot and gives it a higher value. By doing so, they’ve lowered their chances of making it. During your next round, notice how you talk to yourself about different shots and what the consequences might be. Try to stay neutral and treat every shot as if it’s just one stroke, regardless of whether it’s for birdie, par or bogey!

During the shot routine

What’s happening in a Tour player’s head during a shot can be quite different from player to player. Some like to use language, such as describing the shot to themselves – the shape, trajectory, starting point and landing point. Some like to use what’s called a “performance statement” before swinging such as “slow and powerful”. Some might focus on words during their swing. If you don’t already do this, experiment during your practice sessions with certain words that you can use during your routine, which might help you hold your focus and help produce an athletic swing.

The mental game of golf is an individual thing. One of the reasons that it’s a good idea to do one on one mental coaching is that we’re all different in the approach that’s needed. Every player I work with has a slightly different routine – some are more verbal, some more visual, some more technical – we all need something slightly different to focus our minds on to help us stay athletic in the swing.

Practice and develop these techniques, so when you’re in the heat of the battle on the course, you have a powerful set of tools to help you succeed.

How to control your nerves under pressure

When the pressure’s on, you need to have the best tools at your disposal to…

How to get rid of nerves on the golf course?

I was recently asked by a student: “How do I get rid of nerves on…