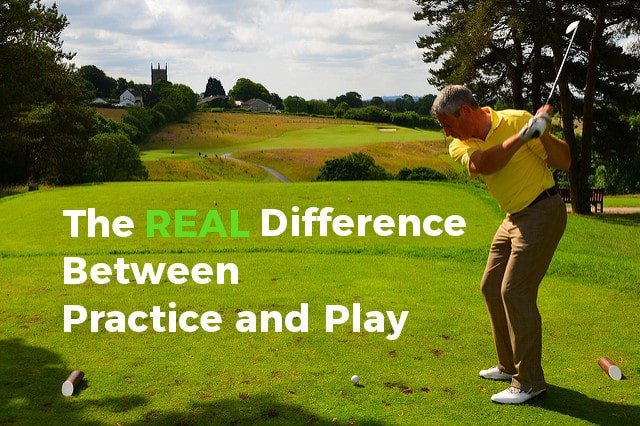 Here’s something I hear all the time: “I’m playing great in practice rounds, sometimes shooting under par, but in tournaments I can’t find anywhere near the same game and often shoot in the 80s, why is this?”

To figure out why this is and how to do something about it, we need to look at what’s changing between these rounds, which is essentially what mental coaching for golf is all about.

The first 3 points, identify the causes of the changes, and the fourth explains the resulting physical change which causes the disconnect in the golf swing. At the very end, I’ll tell you what you can do to change it, so you start playing your best more often, when it counts.

In a tournament round, most golfers feel some pressure to play well. This usually comes from within, and in some cases from parents or coaches (without them knowing it). You feel like your game is about to be measured – all the effort you’ve been putting in practicing is about to be put to the test, and the results will be there for all to see. Are you becoming a better player or not? In a tournament we find out…

Golfers are inherently competitive and they want to prove themselves against other players. In a tournament, you’re also up against the field, so there’s pressure from having your game measured in relation to other players.

Fear doesn’t really exist in practice, but in tournaments it exists in many forms: fear of failure (finding out you aren’t good enough), fear of trouble (where you don’t want to hit it), fear of what others will think (potential embarrassment), fear of a ruining a good score or getting off to a bad start etc. It’s important that you understand more about what type of fear you are facing and how it changes your focus.

In a practice round there are fewer consequences. As your score is not being measured, there’s no real penalty to missing the target. Once you’ve chosen a target, you can play without really focusing on the trouble. In a tournament however, trouble such as water, out of bounds and trees can mean dropping 2-3 shots, so immediately, hitting the target becomes more important. Not only is there a consequence to missing in tournaments, there’s a consequence to making. E.g. If you’re standing over a chip shot knowing that getting up and down will win the tournament, it’s hard not to think about that future consequence, which can also affect focus and the way that shot is played.

This creates a shift from “just hitting golf shots” to what the shot means in relation to your overall success.

Physical changes in your swing or stroke

When we experience those things that we’ve discussed above, they clearly cause physical changes in the way we move our body. In a practice round, we’re able to move fluidly and access our best swing more often.

However, if we allow fear and pressure to set in, this can cause the following, which will causes changes to our technique:

How mental coaching for golf can help

During the mental coaching for golf process, we work on techniques to reduce fear and increase focus on desires. To become a top player (whether at your local club or in the world), you’ll need to learn techniques to deal with the pressure of playing tournament golf, and when you learn these tools, you’ll automatically see an increase in performance and results. The mind is malleable, meaning you can change your habits and the way you think. Just as in the same way you train your swing, you can train your brain.

Mental coaching for golf is about:

Focusing on a process: your unique plan to accessing your best skills during your shot routine
Staying present (fear only exists in the future)
Responding well to bad shots (acceptance)
Building confidence and setting goals
Becoming self-aware, so you can notice changes in your physical and mental state, and with the right tools, you’ll know how to move towards your ideal performance state during rounds.

If you’d like a free 15 minute consultation to discuss your game and how I might be able to help you, please click: Mental coaching for golf.

Photo was taken by Neville Wootton and adapted.

Lucky Golf Secret: You Can Learn How to Be Lucky in Golf

I hear many golfers talking about opponents or playing partners being "luckier" than they are.…