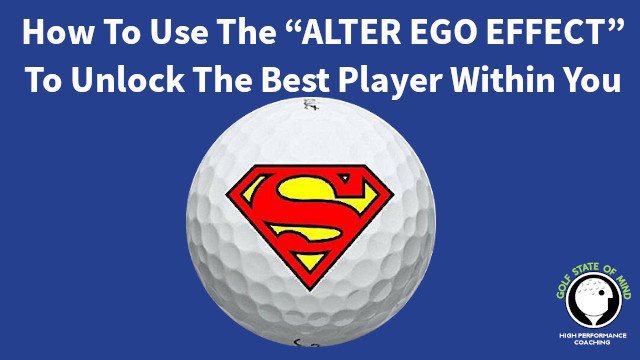 Who are you when you play your best golf? What characteristics and attributes do you have? I’m sure one of them is confidence. But what if there was a way to capture that and become that person, whenever you play?

This is something that Todd Herman has been coaching for many years. In his new book, “The Alter Ego Effect” he describes how helping his clients find their “Alter Ego” allows them to consistently be their best player self and achieve higher levels of performance. So, what is an “Alter Ego”, and how can it help you play better golf?

What Is An Alter Ego?

Todd Herman tells us that the Alter Ego Effect is about identifying the role that we want to play and creating an embodiment of it i.e. your “Alter Ego”, which we can use it as a vehicle to bring out those qualities that we need to perform at our best.

For example, if you were to give a speech, would you want to be confident, authoritative and have good posture, positive facial expressions and eye contact with the audience? Or would you rather be timid, fearful and looking down at the ground with your shoulders hunched? Clearly you would want to be in the role of the person I described first as that would clearly lead to a better speech.

What player do you want to show up?

When you think about your next round of golf, what player do you visualize showing up? Instead of visualizing those outcomes that you don’t want to happen (which will trigger fear, negativity and reasons to shy away), let’s create the image of the player you would want to be E.g. Confident, focused, tough, excited, positive, optimistic, strong body language, etc. Thinking of yourself in this way in the future will help your subconscious create a different reality and trigger those feelings and behaviors that are conducive to high performance.

“Acting as if” can make you feel like you are

Another way to think about the Alter Ego, would be a junior golfer imagining themselves as one of their idols while playing. If you played junior golf, I’m sure you did this. Did it change the way you feel? It did for me. But let’s not be naive, acting as if you are Brooks Koepka, isn’t going to give you his skills.The Alter Ego effect is not about “faking it till you make it”. Pretending to be a scratch golfer when really you’re a 16 handicap will expose you quickly. This isn’t about pretending to have skills that you don’t, it’s about tapping into qualities that already exist within you. By doing so, you gain more consistent access to the best skills you have more often without the inhibition of self-doubt and fear. “Acting as if” you are your Alter Ego, can trigger you to “feel like you are”, which can set you up for more success, especially when playing under pressure.

Having an Alter Ego to maximize performance is not a new concept, especially in sports. Soccer player Zlatan Ibrahimovic “becomes” a Lion. Kobe Bryant becomes a Black Mamba, Many boxers become their warrior Alter Ego in the ring. Sugar Ray Leonard once said that if “Ray” Leonard showed up for the fight he would lose, but “Sugar Ray” Leonard was invincible, as if they were two different people. I believe that having a separate persona in sports explains why the top athletes such as Ibrahimovic, Federer, Nadal, and many others, have had such long and successful careers. Whatever is going on in their personal lives, they are able to flip a switch to become their Alter Ego and play that role consistently, which allows them to perform consistently at the highest level.

Additionally, when you detach your performer self from your actual self, it means you are less self conscious and don’t take setbacks personally. Because you are a performer when you are on the course, not your everyday self, you eliminate a lot of the doubt and fear that your everyday self would feel before and during a competition. By doing this, you make playing golf in the zone more possible.

Spend some time thinking about the player you are (or want to be), when you are at your best on the course and write these qualities/characteristics down. Next, find an Alter Ego which embodies those qualities. Some examples are:

Now you have defined your Alter Ego and who or what that is, now we need to activate it. You can also think of this as “putting your game face on” as part of your pre round warm up and then keeping it on during your round.

Mental rehearsal is a great way to prime your mind to become that player you want to be before a round. How do you want to show up today? Visualization of yourself/this player in a round/tournament, can “program” your subconscious to give you those behaviors during your round. Create that vision of success and mental toughness. There are many other ways you can anchor your Alter Ego, and trigger it before and during a round. I cover this in more depth my Mental Game Training Program.

By making it part of your pre round ritual to activate the Alter Ego Effect and choose to be the player you want to be, you’ll allow the best natural qualities you possess to come through and the effect will be more confidence, freedom and success!

10 Ways To Improve Your Game Over The Winter Months

For those of you that are feeling colder temperatures and seeing shorter days, you’re probably…

10 Habits To Make You A Happier And More Successful Golfer

Conditioning your mind daily is not only an important part of mental coaching for golf,…

Controlling Your Performance State In Golf