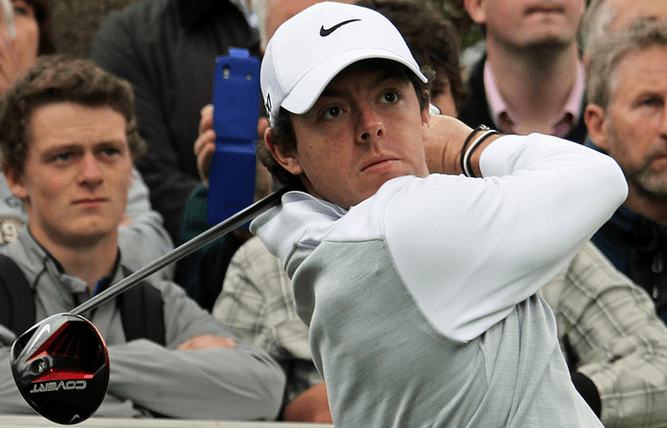 Throughout all 18 holes of Rory’s victorious final round of The Open Championship, there were 2 “Trigger words” he used repeatedly to make sure his focus was on the things that were going to enable him to finish the job and become The Open Champion for the first time.

“Mental game triggers”, “Success mantras”, “Action Phrases” or “Self-talk” are a simple yet very effective way to keep you positive, in the present and focused on the most important factors for playing your best golf.

During a round, the world’s top golfers can use any number of these words or triggers, but it depends on what works for them individually.

To find out your own verbal triggers, be aware of the things you say to yourself during a round and how they make you feel. I’ll give you a few later in this article.

So what were the 2 words that Rory used to keep his final round going and ensure his win at Hoylake?

And what do they mean?

To play a great round of golf, you need to be focused on “The Process” not the results. This means that instead of focusing on the outcome of shots and what it means for your score, your focus is always on what you need to best-prepare and execute the shot at hand. I’ve written plenty of articles on the importance of the pre-shot routine (or “shot routine”). Focusing on the steps of hitting a great golf shot, distracts you from its importance or other things that are going on around you (there’s A LOT of distractions during a major). The outcome of the shot is also one of those things that’s outside your “cocoon”.

Starting to think about the outcome of your shots takes you out of the present moment which can raise tension levels and affect your swing, so it’s important to be able to “switch on” and “switch off” during the round and that’s what the process is all about. Acceptance is also a big part of “the process” and if you build it in to your process and make it a habit, you’ll quickly get over bad shots (essential for playing your best golf).

What Rory was trying to remind himself here, again, was process over outcome during his putting stroke. Instead of thinking about what a putt might have meant for his score or thinking about his mechanics, all Rory focused on was a “spot” he had picked a few inches in front of the ball that he wanted it to roll over. If it went in, great, if not, he did all he could. Then he accepted whatever happened and moved on quickly. Rory said:

“I was just picking a spot on the green and trying to roll it over my spot,” he said. “I wasn’t thinking about holing it. I wasn’t thinking about what it would mean or how many further clear it would get me. I just wanted to roll that ball over that spot. If that went in, then great. If it didn’t, then I’d try it the next hole.”

Try this during your next round.

Triggers can be used at other times during the round, such as during your routine to make the change from your “conscious” mind to “imaginative” or “sub-consious” mind. This is when you’ve decided on the strategy and target and then start to get engaged with the shot you’re going to hit to that target.

Some players say a word, like “commit” or “focus” to get them going into “the play box”. Other players use a deep inhale and exhale. Physical triggers before you swing can come in the form of waggles, a set number of looks at the target, a 1-2-3 and there are many more… Try a few and see what works for you.

Key phrases and mental triggers are also apart of a broader internal dialogue you can have with yourself called “self-talk”. I’m planning to write my next article on this, so I’ll save it for later, but it’s very helpful to have a handful of phrases to re-frame your mindset (back to a winning one), should you start to say the wrong things to yourself.

Are you Thinking or Playing Golf?

Have you ever noticed that when you're playing your best you're not really "thinking"? You're…

How To Use Your Mental Game Scorecard

When you step onto the first tee, your technical skills are what they are. It's…

How To Free Your Mind And Play Better Golf

“I just stay in the moment…I never think one hole ahead. I’m not thinking about…