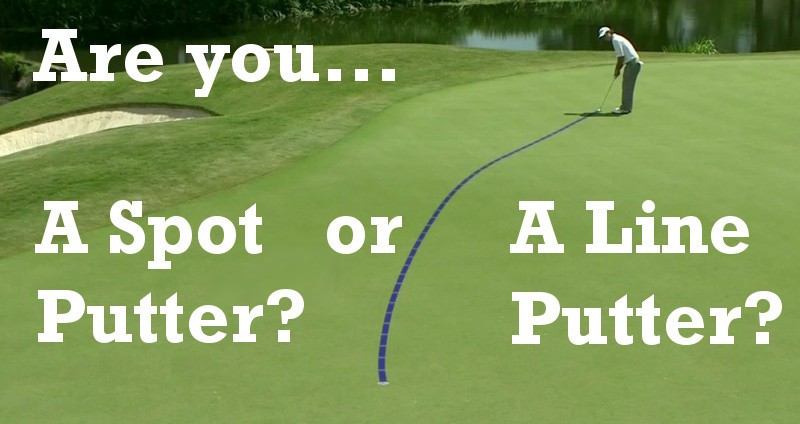 Whenever I discuss pre-putt visualization with a new student, they will always have one of two responses. There are those that see putts in curves (unless it’s a dead straight putt) and there are those that visualize all putts as straight, no matter how much break there is (spot putting). Neither method is proven to be more effective than the other, but it’s important to think about how you visualize on the greens and here’s why.

Those players who say they see puts in curves are saying that they imagine a line (or curve) on the green that the ball would have to track to get to the hole (like in the image above).

Players who see shots in curves, use more of their right brain than their left brain in the targeting process. In other words, they are more “right brain dominant”. The right side of the brain uses imagery, more than it does verbal and technical instruction while performing a task. People who are right brain dominant are generally more artistic, creative and intuitive and need to see visualize concepts to understand them.

However, the other group of players, those who see all putts as straight (spot putting), are more “left brain dominant”. The left half of the brain is more logical, analytical and uses more verbal instruction to explain things. For left brain dominant players, it’s much cleaner and easier to see putts as straight lines, than it is curves. It makes it more precise, like a architectural drawing vs an artist’s sketch.

For these players, instead of seeing a curved line the ball will take to the hole, they see a different target, or “spot” (an imaginary hole), which is in a straight line from the ball (as in the image above).

A spot putter would putt as if to get the ball to come to rest at that spot (imagining every putt as flat and straight), but let gravity (the slope of the green) take it towards the hole. 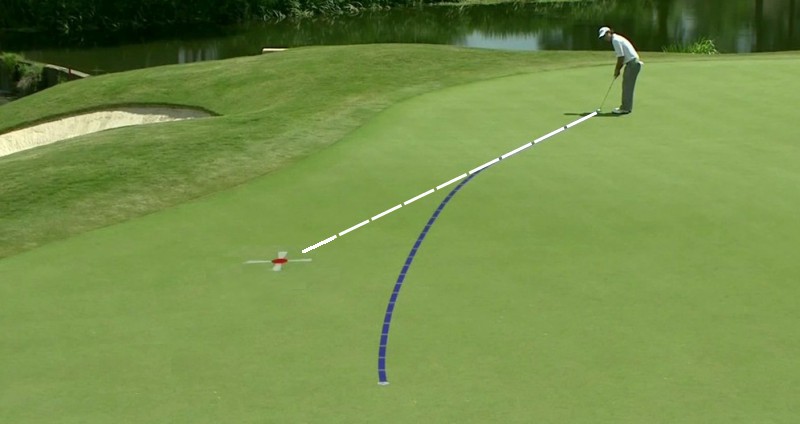 For example, in the above image, the player has read that the putt is downhill with approximately 6ft of break. Hence the spot putter’s imaginary hole is 6ft right and short of the hole. The more downhill the player thinks the putt is, the shorter his/her imaginary target is.

Line (or curve) putters might also use a spot on the green, but this would be a spot that the ball would roll over and be part of the “curve” the player is seeing, so they can get properly aligned to start the ball on the right line (an intermediary target, if you will).

How to use spot putting

Both techniques (straight vs curved) will typically use one of two ways to get aligned to the correct start-line. Some players like to see a “spot” a 12 inches or so from the ball, that the ball needs to roll over to get it started on line. Some players might use a line on the ball which is aimed at the start-line. To find out some ideas for a complete putting routine, you can read my article “The Tour Player’s Pre Putt Routine“.

A consistent putting warm-up Golf is a game of confidence. How you approach each round…

How To Become Fearless Over Short Putts