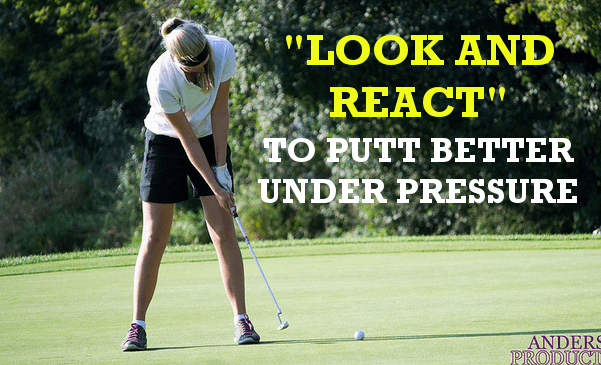 Do you ever stand over a must-make 5 ft putt and get totally overwhelmed by the situation?

Do you lose confidence and make a jerky, stab at the ball instead of your normal free-flowing stroke?

Physically speaking, a 5 footer is a 5 footer, whether it’s in practice or in competition.

But for you, at that moment, it’s the difference between success and failure.

The hole seems a lot smaller.

Your previously quiet mind is over-run with the noise of what making that putt will mean for you in the future.

Tension creeps into your grip without you knowing it.

Your tempo gets quicker, and…before you know it…you’ve blown it 🙁

Why does pressure affect the putting stroke?

Golfers that reach the top level have holed thousands of putts under pressure. They don’t get to this level because they are born mentally tougher than you or I, instead they’ve learned the proper mental techniques to allow them to access their natural stroke, even under the highest pressure.

The difference between your stroke when making a 5 footer in practice and a 5 footer to win the club championship is to do with:

However, there are a couple of good techniques to counter this and have you putt more freely when the pressure is on:

Make it more reactive to putt better under pressure

Golf is a hard game because you have a lot of time to think.

In those games, you don’t get a lot of time to think consciously, you’re just having to trust your practice i.e. think subconsciously.

In golf however, the conscious mind can go into over-drive in between and even during shots. A lot of the ways to control the in-between shots thoughts can be found in my free video series:

To putt better under pressure, you need to make your putting stroke more reactive.

Before each putt, I’d like you to “look and react” instead of what you might currently do: look and think. This way, you’ll be using your subconscious mind to turn the ”look” into a reality i.e. you’ll be accessing your natural stroke.

Make it part of your pre-putt routine to take 2-3 good “looks” down the line of the putt and then simply, “react” to that imagery! Don’t give yourself time to think. See a vivid image of the line the ball will take and see it going in, and then just glance at the ball before taking the putter back. Some elite players I’ve worked with say that it seems like they start their back-stroke before they bring their eyes back to the ball. Problems can arise when you look at the ball for too long which can cause freezing and tension. You need to remain connected with the putt (what’s in front of you) at all times.

Occupy your conscious mind…so the subconscious can make the stroke

Here’s a technique you can use on the course, in pressure situations.

It involves counting, before, during and after your stroke. The idea here, is that instead of thinking about your mechanics or the consequences of making or missing the putt, you distract yourself by counting.

Once you’ve gone through your pre-shot routine and the putter is behind the ball, count to the following 5 actions:

So the whole putting action takes about 5 seconds.

Give this a go when you’re under pressure and let me know how it goes.

Knock 3 Shots Off Per Round by Simply Using Your Eyes

As golfers, we all seem to be looking for that magical swing change that will…

How To Make More Putts

Once you have your putting fundamentals down (you should always spend time practicing alignment, ball…

Narrow Your Focus For Better Putting