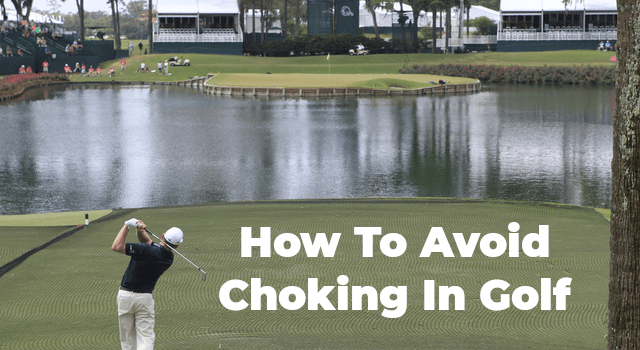 One of the most common reasons that I see players fail to reach their potential is because their performances are sabotaged by a fear of failure. This fear can often cause what we know as choking in golf.

Such fears could be:

Fear is a normal part of the human experience and it’s not wrong to feel it. Simply put, it’s the mind’s projection of a future negative (or painful) event that impacts how you think and feel in the present.
Think of any scenario that would make you feel uncomfortable (a popular one for most is giving a speech in front of a large group) and immediately a movie will play out in your head and change the way you feel inside. We experience the stress or fear response to various degrees – butterflies, sweating, increased heart rate and possibly shaking hands.

Why does fear exist?

The purpose of fear is to help us survive and avoid pain. In the past, fear kept us away from large predators. In the present day, it’s purpose is more so to keep us away from the threat of emotional pain, rather than physical. What we fear can vary from person to person, but it’s our subconscious telling us that we should prepare ourselves for danger or try to avoid it all together.

Whatever triggers fear for you or causes choking in golf, to overcome it you will need to change your relationship with it and learn strategies that will help you control it, operate in its presence, and deal with the thoughts and feelings that can arise from it.

1. Accept That It Will Be Present If You Are To Grow

“Courage is not the absence of fear, but the triumph over it. The brave man is not he who does not feel afraid, but he who conquers that fear.” – Nelson Mandela

Do you think that a professional golfer is “fear-less” when they play the 18th hole of a major with the lead? That rush we get from fear is one of the reasons we play the game. The skill is to control it and not let it control you.

The first step to controlling fear is accepting that it will be present and that you will feel uncomfortable many times on your journey. That discomfort is nothing to be afraid of – if you can push through it, you get to the gold on the other side – growth and fulfillment. The easy, more comfortable path won’t lead to it.

2. Change Your Perspective on Failure

“Golf is insane. One day it’s great, the next it’s awful. What a sport I decided to play.” – Justin Thomas

Failure is possible in every round, accept it, don’t fear it. Could failure be positive and nothing to be feared?
To help my students with a fear of failure, Module 1 of my Mental Game Training Program helps them develop more of a growth mindset. If you’re not familiar, growth mindset people have the belief that they can improve themselves and part of the process is taking on challenges that they might fail at. That belief alone helps them learn and grow more than someone with an ego or fixed mindset. For a player with a growth mindset, failure is seen as learning so there is less disappointment and less of a negative emotion attached to it. If you don’t succeed, you learn something that is going to make you a better player in the long-term. For every player (including the best players in the world, like Justin Thomas), there are more failures in this game than there are successes. Having the perspective that failure is learning, and nothing is “wrong”, is important in bouncing back and not creating scar tissue.

When you can see and interpret failure as an opportunity for growth, you’ll be more in control of fear and be able to give more of your mental energy to your intentions (as on your mental scorecard for golf) and your best swing/stroke will appear more often.

3. Change How You Respond To Failure and Choking In Golf

To control the fear of failure going forward, we need to look at how our failure has been handled in the past. A player might have had a bad experience and now has a deep memory of what that feels like. It’s stored at a subconscious level. From my experience, fear of failure is less about avoiding an event, but avoiding the feeling that the event created. This is why our interpretation of events as they happen is so important. If past failures triggered a bad mood and negative self-talk, then the wounds from that event will be deeper and take longer to heal, making those same events trigger a stronger feeling of fear going forward.

Some golfers take failure in golf personally, as if it says something about them as a person which makes it even worse. Remind yourself that you are great no matter what score you shoot. The times we feel the disappointment of a poor performance are the times we need to be self-compassionate, not self-critical.

A key factor in reducing fear and choking in golf is dealing better with failure as it happens, which is accepting it, learning from it, and moving on from it quickly. Don’t allow those experiences to have so much power over your future success.

Learning how to control fear is progressive. If the size of fear is proportional to the size of what we perceive we could lose, then it makes sense to gradually increase the amount we have at stake and learn how to successfully manage the thoughts, feelings and discomfort that come at each level. E.g., If you have a fear of public speaking that you want to overcome, you wouldn’t want to do it by speaking in front of a thousand people. Instead, you would gradually “expand your comfort zone” by speaking in front of smaller groups and work your way up to larger ones. At each level, you can learn how to deal with the mental and physical changes that occur when fear is present.

It’s the same thing in golf – you can’t learn how to overcome that feeling of discomfort of leading a Major Championship when you’ve never even played in a PGA Tour event. Jack Nicklaus said that it took him a lot of second place finishes to learn how to win.

By expanding our comfort zone, what we perceive as “uncomfortable” changes. The amygdala, which is the part of the brain that controls the fear response in humans, can actually reduce in size, so what might have triggered fear in the past no longer does. In the documentary “Free Solo” about the free solo rock climber Alex Honnold, we learn that after risking his life daily, his ability to feel fear had diminished to almost zero. Neuroscientists were shocked to learn from an MRI scan of his brain that his amygdala had shrunk to the smallest they had seen.

Obviously this is an extreme case, and you are not risking your life playing golf, but by putting yourself in situations that make you feel uncomfortable, your fear response will reduce to more manageable and performance enhancing levels.

5. What Are Your Sources of Fear?

“Know Thyself” – Socrates
Working on your inner game requires being able to take an honest inventory or yourself and knowing your strengths and sources of confidence and your weaknesses and sources of fear. In the first module of my mental game training program, we do some “self-discovery, so you can understand yourself better and what causes fear and changes in your mood. Self-discovery and getting to know yourself better is key to knowing how to improve your mental game of golf.

Whatever your level of play, I’m sure you’ve experienced the feeling of playing under pressure…

Effects of Self-doubt on Performance

10 Ways To Make Best Use of The Shutdown

Whether you are a player, coach or parent, we are all having to deal with…