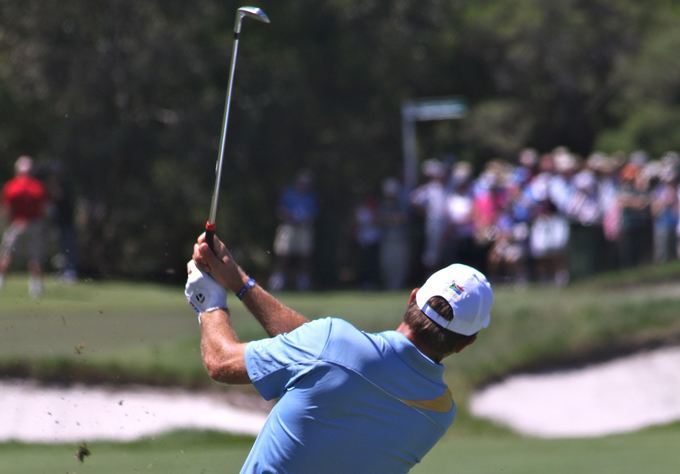 Yani Tseng, the number one female golfer in the world, is in the middle of a terrible slump. It’s a sad thing to watch. This great golfer, and great person, not too long ago dominated the LPGA tour. She was predicted to win just about everything she entered. I would say she was more dominating than Annika Sorenstam was in her prime. But now, here are her distressing stats for 2012.

Five months without a top 10. Sixteen consecutive rounds without breaking 70. An average final round of 74.3 since April.

Tseng started this year looking very much like the most dominant player of any tour. She won three times in five starts and finished in the top 10 in all eight of her LPGA Tour events through the Match Play Championship.

Not only has she gone 11 straight LPGA events without a top 10, the difference between the two halves of her season is staggering.

She also fired her caddie with hopes of changing her luck. When she went to hire him back, he had already switched to U.S. Women’s Open champion Na Yeon Choi.

”I feel I’m happier and enjoy life more instead of trying to worry about world No. 1 or winning the tournament,” she said. ”I just want to go out there and have fun with everybody else and try to make birdie every hole, and if not, go to the next tournament and try to play well. We still have more tournaments and next year to come.”

It’s that attitude that makes Yani so endearing, and has me pulling for her to find her form again.

The slump. Any of us who’ve played golf long enough have experienced a slump. And how to break it? For a slump untreated, like an infection, can lead to a more serious illness. Whereas a slump treated will hasten the healing process. First thing then is to take a proactive stance and treat the condition rather than let it run its course. In golf, it won’t necessarily go away by itself. Try the zen approach, meaning you go into the heart of the matter without overthinking it. You hold the slump up to the light. You look at it like a crystal from all angles. You feel the slump in all its changing forms. And you take some initial action. My suggestion is to spend time on the range and not play the course for awhile. For what you need is to confront your relationship with golf, in a broad brush sense, rather than a surgical approach, cutting and probing and dissecting and video taping ad infinitum.

For a slump is like a depression: It has been brewing for a long time before it appears as something you are aware is a problem. And like depression, before you can do something about it, you need to acknowledge it as a problem. From Yani’s statement about being happier and having fun, it seems she is not quite there yet. You’ve got to go into the depths of the kitchen and sift through the ashes for awhile. You see, the slump is more a teacher than an adversary. We think it has developed to lead you away from the game, but really, the slump shows you a pathway toward more intimacy with the game. You love this game. It is part of your life. It is a source of much joy and fun. But there is a deeper aspect to golf that must be acknowledged–an aspect that transcends desire, ambition, and pride. The great world teacher, Krishnamurti, was a golfer, and I’m sure knew of golf’s ability to take one into deeper realms of consciousness. And if you’re not aware of the need to come face to face with golf in this context, then a slump will remind you, as depression will remind you of the need to explore your inner life more fully and comprehensively.

Golf as guru. Most other sports take you to the edge of ecstasy, but not beyond. And it is this beyond that golf offers as a gift. Accept the gift to explore this territory and you take on the journey of a human being being truly human. Reject the gift and you reject the deeper essence of golf as a metaphor for life. Most reject the gift, settle for golf as yet another endeavor to be achieved, and eventually experience discomfort, a more useful term than the Buddhist “suffering,” which can avalanche into a slump.

So what you want to do on the range is attempt to hit the ball on the sweet spot as much as you can. You’ll know if you’ve done this by the sound the ball makes when it leaves the clubface. There is sight too, as the ball will hang in the air suspended in a kind of blissful slow motion before it descends to earth, feather-like. This combination of sound and sight of a well struck golf shot can lead you into a higher and deeper intimacy with the game. Of course, you’ll want to continue on the range until you can experience this consistently. Be patient. This could take days, weeks, or months. Legend has it that the great touring pro and TV commentator, Lanny Wadkins, shot 79 the first round he ever played as a youngster. How? He became intimate with his golf swing on the range.

So find a range with grass tees. You’ll eventually hurt yourself hitting too many balls off artificial mats. If you can’t hear and see what I’m describing, find a pro you can relate to and take enough lessons to get the fundamentals down. Golf takes precise rhythm and timing so you have to know what you’re doing and why. Listen to the ball off the club and watch its flight. When you achieve what I’ve described consistently, go to the short game practice area and make sure you can hit the sweet spot when you chip and putt the ball as well. Doesn’t matter where it goes. Just hit the sweet spot, hearing that lovely ping when it leaves the clubface.

Now, go play. Chances are your slump may be over, or, as Leonard, the Native American shaman on Northern Exposure, always said, “Or not.”

And good luck, Yani. You go, girl. From the ashes, may the Phoenix bird rise.

We’ve all been there. You have a solid round going and then out of nowhere,…