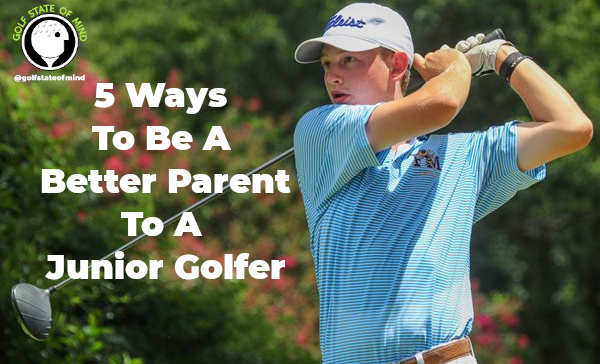 Junior golf is more competitive than ever. There are more and more tournaments each year and a greater depth of talent and ability in every age group. To be competitive and reach a high level, a junior golfer not only needs good technical skills, but they need to develop a mental game that can allow them to access those skills under the pressure of such intense competition.

From my 15 years spent working with junior golfers on the mental game, I know that they can sometimes struggle with the following, all of which can prevent them from playing their best game in tournaments:

Parents and coaches have a big influence over the development of a junior golfer’s mental game and how well they cope with and overcome these struggles.

What they say before and after rounds can affect their junior’s state of mind and performance. When I do remote mental golf coaching sessions (link) with a junior, a parent or coach will often join us in the sessions, to learn the strategies to help them improve their junior’s mental game.

Fortunately, juniors are very “coachable” and can learn new mental skills and change thinking patterns quickly. If you are a parent or coach of a junior, I’d like to share 5 ways that you can begin working on it.

1. Reward their process not the outcome

There are so many variables and possibilities in a round of golf. Without a solid mental game, the mind can wander and shift between all these possibilities, causing performance anxiety and a loss of focus on what’s most important. A junior can think: “What will I shoot?” “Will I qualify?”, “What will my parents and coaches think of me if I don’t play well?”, “I wonder which college coaches are here today?”, “I wonder who’s in the field this week?”, “Will I be able to compete with them?”

This is where a “Process” comes in. A Process simplifies a round and breaks it down into objectives that are 100% certain and achievable. When a player sets (and focuses on) simple process goals for each round, it immediately relieves some of the performance anxiety felt from having to go out there and shoot a good score and finish in the top 10 (which is complicated).

First, the junior golfer needs to define their process goals and to be accountable to them. Each player’s process goals might be different, but it will include what they think is most important for them to focus on in the various stages of the round. It could be the steps they take in their pre shot routine, how they respond to shots, their attitude, etc. After the round, reward them for achieving the behaviors and actions that are conducive to a good performance, rather than the outcome of that performance (their score). The more this is repeated, the more they will develop the “Performance Habits” that help them score better.

Studies show that a junior’s concentration is most affected and physical anxiety is highest when a parent is expecting them to play well or is overly invested in their success. As a parent you have a lot of influence over your child, but the time before (and after) a round, isn’t the time to exert that influence.

You might think that it’s a positive and a confidence booster to tell your junior that “you can win this tournament”, but the reality is that it probably adds pressure and creates worry about letting you down. You don’t want to make them feel like they have the additional pressure of your happiness resting on the score they shoot.

Saying less is definitely better than saying more when it comes to the pre and post round chats. Your approach to your junior’s round should be the same whatever tournament they are playing, which is really a “supporting role”. Instead of focusing on how well they could play and setting an expectation/prediction for it, create freedom by saying very little, such as: “Just stick to your process goals and hit each shot as best you can, and we’ll see what happens. Most of all, enjoy it!”

As a parent myself, I know that it can be hard not to show your emotions when you’re watching your junior play a sport. However, a junior is inherently sensitive to their parents’ emotions. If you’re showing a full range of emotions while watching (e.g., excitement when they are doing well, disappointment when they are playing poorly), they will pick up on it. They will feel like they are responsible for how you feel, adding more pressure to each shot. Try staying emotionally neutral. Celebrate in their successes afterwards but hold in emotions during the rounds.

4. Tell them that mistakes are OK

To have the freedom to learn and grow, kids can’t see mistakes and failures as being wrong, but as good learning opportunities that develop skills and mental toughness. Parents play a big role in them developing a “growth mindset”, which allows them to play without the fear of making mistakes and learning from them along the way. To keep improving and pushing through comfort zones, your junior must be comfortable with making mistakes, not thinking that you will be disappointed in them if they do. You don’t want them to shy away when things get tough, because they think they might fail, but to develop resilience and perseverance, which requires trying -> failing -> learning, many times along the way. Sara Blakely, businesswoman and founder of Spanx, grew up to her father asking, “What did you fail at today?” Being able to answer this question meant that she had tried new things and pushed herself out of her comfort zone, which is the optimal way to learn.

What you say after each round will have a long-term effect on your junior’s mental game development. If they seem disappointed, let them sit with it. If you jump in and try to make it better and give them advice, you are interfering with a valuable opportunity for them to gain emotional mastery. If they seem like they want to talk about it, ask them how they felt it went and listen. After you’ve heard them out, you’re far better off asking them “so what do you want for dinner?” than taking that opportunity to coach them, or worse, acting disappointed in them.

When the initial post round emotions have had time to settle (which might be the next day), ask them what they did well and have them list as many things as they can (good shots, aspects of their game, etc.). Point out the things that you noticed that they did well. Once they’ve had time to reflect, ask them to give you a couple of things they could have done better and how they will improve it next time. All my students write a post round journal entry (I have a template for it) which prompts them to think about it. There is no such thing as a bad round as everyone is a learning opportunity!

The real value of Improving A Junior Golfer’s Mental Game

True success in the game of golf comes not from winning or good scores, but from what it teaches us about how to succeed at the game of life. With the right approach, parents can facilitate their junior learning valuable life skills, so whether they become the next Rory McIlroy or not, they’ll be better and higher achieving human beings.

Helping A Junior Golfer With Their Mental Game

It’s never too early to begin helping a junior golfer with their mental game. Golf…

Advice For A Parent Of A Junior Golfer

Having been a mental coach to many junior golfers throughout the past 10 years, I’ve…

I work with many junior golfers who regularly compete in AJGA, Hurricane Tour and regional…