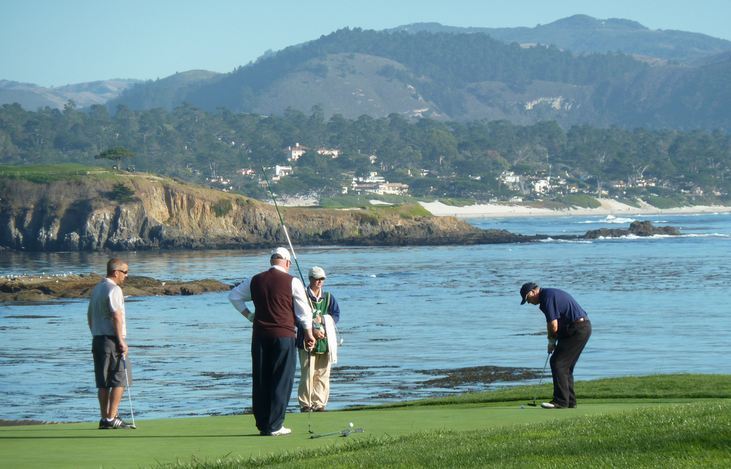 They played the Nature Valley First Tee Open at Pebble Beach a few weeks ago: Champions Tour players matched with First Tee kids from around the country. It was a benefit for this fabulous organization that teaches kids not only how to play but the core values that golf represents. I was touched hearing one young man’s story of his struggles with addiction and how golf and the First Tee helped lift him out of the ashes and into self-respect and hope. His parents were also interviewed later and a look of pride and gratitude radiated from their faces. Champions Tour pro Olin Browne stood next to the boy during their round, congratulating him for his courage and fortitude, and for the birdie on the last hole.

Golf values? First Tee participants learn to appreciate diversity, resolve conflicts, build confidence and set goals for their future. Its life skills curriculum focuses on four categories – interpersonal skills, self-management, goal-setting, and resilience skills – and Nine Core Values – honesty, integrity, sportsmanship, respect, confidence, responsibility, perseverance, courtesy, and judgment. I wish there was a First Tee for adults, something like a Second Chance Tee. Golf needs such a makeover. The game has slipped both quantitatively and qualitatively: Fewer people are playing the game, and of those who do play, there is less courtesy, honesty, integrity, and respect. There is less consciousness, a word not widely used or understood in our often egocentric society. Since the end of World War II, we have become the me-my-mine generation, and that includes all age groups. Golf’s bar of civility has been lowered, evidenced by pros spitting on putting greens, being dismissive of fans, fans being disrespectful to pros by snapping their photos and yelling “Get in the hole” even before impact. Amateurs plod along like armadillos, oblivious to the needs of others, encrusted with the me-my-mine mentality that slows things to a stop, making it near impossible to maintain any semblance of rhythm and pace in one’s swing. And it doesn’t seem to matter whether someone is experienced or a hacker. The experienced have deluded themselves into believing their money games take precedence over anyone else’s game, leading them to line up putts like Ben Crane, causing approaching players to consider either hari kari, homicide, or worse, giving up the game. Consciousness is an evolutionary trait, and the actions of one player can help tip the scales one way or the other. It’s like the hundredth monkey concept, where monkeys on one Pacific island began washing their potatoes, which then led monkeys on other islands to do the same even though they had no contact with the the first potato-washing monkeys. Get it? Start being conscious yourself and other golfers will catch on and increase their own consciousness.

And what exactly is consciousness? It’s a sine qua non for all the values of the First Tee. Simply said, it is taking into account the condition of others, whether animal, vegetable, or mineral. And once taken into account, it is acting in a way that will protect, benefit, and enhance the lives of others while taking care of yourself at the same time. Even more simply said, consciousness is the Golden Rule: Do unto others as you would have them do unto you. Let’s be clear. We have often distorted that Rule to read, Do unto others as you think they would do unto you. It’s a trick of our often distrusting, almost paranoid minds to ignore the needs of others because you think they don’t give a damn about you. That’s what we’re devolving into, and that has to change.

And if we can change into more conscious beings, we open up the possibility of reaching the tipping point, a concept proposed by Malcolm Gladwell in a book of the same name. It’s a point that’s reached when a trend or preference of a few goes viral and inhabits the consciousness and actions of the many. It can start with something very small, like a few people wearing flip flops to something very big, like millions around the world wearing this unlikely footwear. It can be a word like “cool” or “like”, or some tinkering in a garage in Palo Alto into a company called Apple.

So how do we increase our consciousness as golfers? Let’s start with small things–things that get us to pay attention to those around us. Things that get us out of our own limited sense of self and into considering the needs of others. I’ll list some. Perhaps you can suggest others.

* Be careful not to step in the line of a playing partner’s putt. Again, apply the Golden Rule.

* Don’t talk or move when others are swinging. Golf requires intense concentration. Any distraction detracts from that concentration.

* Keep up. Always monitor your own pace of play by checking your position in relation to the group in front and the group behind you.

* Leave the pot and beer at home. The only high on a golf course should be the high-five after a great shot. To be more conscious of others, stay sober.

* Tend the flagstick, with your shadow out of the way, for others who may need it.

* Yell “Fore” if your ball is flying near another golfer. And don’t hold back. Yell it loud. I was hit once in the upper back from a fairway wood without a peep from the ball striker. No fun there.

Of course, there are other factors but this will get you started on the road to higher golf consciousness. You’ll be helping to speed up play. You’ll be known as a knowledgeable, courteous player, and you’ll be sought out as a playing partner. I think, too, it will help improve your game. Being more conscious of others, helps you be more conscious of yourself–your body, your mind, your swing, and your relationship to the moment at hand.

The Power Of Words and Self Talk In Golf

How to control your nerves under pressure

When the pressure’s on, you need to have the best tools at your disposal to…