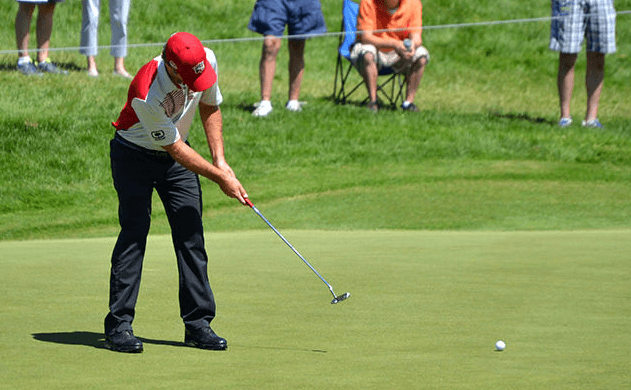 I’ve put together a few more drills practice drills for your putting, to get you consistently hitting the center of the putter and making more putts, especially under pressure.

1. Keep the Eyes looking down

I wrote about this concept in a previous putting drills article and it’s a very important one.

Problem: When we’re under pressure in tournaments, we tend to want to look quickly at the outcome of the putt. You probably don’t even notice it, but if you look up a split-second too early before you’ve finished your stroke, the left shoulder (for a right hander) lifts up resulting in mishits and putts hit with an open putter-face. This can result in several missed putts per round.

Solution: Better and more consistent putting comes from keeping your head steady. When you’re on the practice green, take a penny or a ball marker and place it on the green and put the ball on top of it. Make a putt of any distance and make sure you keep your eyes down in exactly the same position so after the ball as been hit, you’re looking directly at the penny or ball marker. Ideally you should be able to keep your eyes down long enough to say “in the cup”.

Try this repeatedly every time you practice your putting and you’ll quickly start putting more consistently under pressure.

Problem: Have you ever noticed then when you’re nervous about a putt you tend to leave the putter face open and cut across it causing a push out to the right? The cause of this is a tightening of grip pressure causing the right hand to not release properly through the putt and keep it on the intended line (yes, the putter opens and closes slightly through the stroke).

Drill: From about 4-5 ft out drop several balls and putt them in to the hole with your right hand only. You’ll quickly feel that sensation of release through the stroke, which is key under pressure.

Do you find yourself throwing away strokes by missing too many short putts. In this…

How to Eliminate The 3 Putt With A Good Mental Approach

The great thing about putting, is that it's less about technique and more about your…